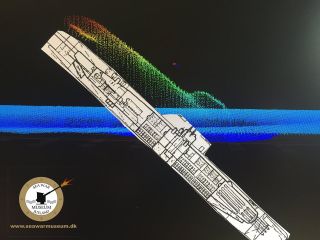 Two days before the Allied forces declared victory over Nazi Germany at the end of World War II, a high-tech German submarine set out from Denmark on a mysterious mission.

The sub was a brand-new Type XXI U-boat, hailed as the most advanced Nazi submarine of its time. It was deadly quiet, superfast and allegedly capable of traveling from Europe to South America without having to surface. Still, for all its cutting-edge technology, the sub could not save itself from being blasted to the seafloor by a British aerial assault on May 6, 1945. [Images: Missing Nazi Diary Surfaces]

The boat, named U-3523, lay undetected at the bottom of the North Sea for 73 years. This week, researchers at the Sea War Museum Jutland in Denmark finally found the U-boat's wreckage, half-buried and jabbing diagonally from the seabed like a cannon from a turret.

Researchers at the museum are in the midst of doing an extensive scan of the seabed around the North Sea and the Skagerrak Strait (which flows between Denmark and Norway) and have documented more than 450 wrecks so far, according to a statement from the museum. Twelve of these wrecks so far have been submarines (nine of which were German-made, and three of which were British), but the newfound U-3523 represents an especially rare discovery, museum officials said.

"This was the most modern submarine the Germans built during the [Second World War]," Gert Normann Andersen, director of the Sea War Museum Jutland, told the Danish newspaper Kristeligt Dagblad in an interview (translated from Danish). "Only two of the 118 that were ordered actually entered service."

Researchers with the museum found the half-buried wreckage of U-3523 about 10 nautical miles north of Skagen, the northernmost city in Denmark. The bow of the 250-foot-long (76 meters) submarine stabbed into the seafloor some 400 feet (120 m) below the water's surface, slanting upward with the boat's stern floating 65 feet (20 m) above the bottom of the sea.

According to the museum, the boat embarked from Denmark with 58 crewmembers, all of whom perished in the bombing. Their mission remains unknown, but museum researchers suspect that the boat was likely fleeing for safety days after German forces surrendered in Denmark, the Netherlands and northern Germany. Among the vessel's new technology was a battery system that could allow it to remain submerged for several days at a time, making it a perfect getaway vessel, Andersen said.

Following the end of World War II, rumors abounded that high-ranking Nazi officers (including Hitler himself) had escaped to South America on similar long-range submarines. Many of the original 118 Type XXI submarines were captured and dismantled after the end of the war, but countless others still remain missing.