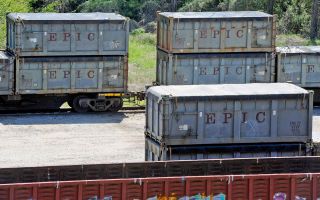 A train filled with smelly human excrement from New York City has been stranded in a small Alabama town for two months, according to news sources.

This situation is definitely strange, and it begs at least two questions: What exactly is on this train, and why the heck is it in Alabama?

First off, officials are using the term "biosolid" to describe the train's contents. Biosolids are "nutrient-rich organic materials resulting from the treatment of domestic sewage in a treatment facility," according to the Environmental Protection Agency(EPA). In other words, the train carries processed New York poop. [5 Things Your Poop Says About Your Health]

Biosolids may smell foul (although this can be fixed by adding lime), but they aren't completely useless. According to the EPA, when biosolids are treated and processed, the results can be used as fertilizer.

In fact, processed poop is better than the way things used to be. "Thirty years ago, thousands of American cities dumped their raw sewage directly into the nation's rivers, lakes and bays," the EPA said. "Through regulation of this dumping, local governments [are] now required to treat wastewater and to make the decision whether to recycle biosolids as fertilizer, incinerate it or bury it in a landfill."

However, some areas have stricter dumping laws than others, which explains why the New York biosolids were sent southward. A federal ban prohibits New York from plunking its human waste in the Atlantic Ocean, whereas Alabama has inexpensive land and lenient zoning laws, according to the Associated Press (AP).

Alabama isn't an outlier, either. Many Southern states have laxer laws regarding garbage than the rest of the country, which explains why Georgia, Alabama and their neighbors have accumulated all kinds of waste in the past several years, the AP reported. That includes toxic coal ash from the nation's power plants, the AP said.

The train was originally bound for Big Sky landfill, located about 20 miles (30 kilometers) east of Parrish, Alabama, according to the AP. But even though the landfill has taken sewage from New York since early 2017, the nearby town of West Jefferson obtained an injunction to stop the contents of this particular train from reaching its destination, the AP reported.

The biosolids have caused the town to become "infested with flies" and it "smells of dead rotting animals as well as human waste," West Jefferson’s attorney wrote in a lawsuit against Big Sky Environmental LLC, according to the AP.

So, with nowhere to go, the train sat idling in Parrish, Alabama, a town of 982 people, ever since, the AP said.

This isn't the first unwanted trash heap from New York. In 1987, a barge carrying 3,186 tons (2,890 metric tons) of paper and commercial garbage from Long Island and New York City was seabound for two months after plans fell through to give it to a private developer in North Carolina, the AP said.

After being turned away from Louisiana, Texas and Florida, along with the countries of Belize, Mexico and Cuba, the garbage eventually returned to New York. There, it was burned in Brooklyn and buried in a local landfill, according to Newsday.

Meanwhile, it's still unclear where the waste on the poop train will end up.