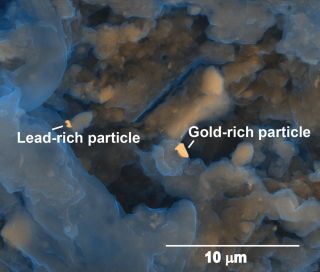 Instead of flushing millions down the toilet, humans could be mining their poop for gold.

That's at least what some researchers with the U.S. Geological Survey (USGS) think. They're looking for ways to squeeze metals like gold and silver out of solid waste.

When poop arrives at a wastewater treatment plant, it is separated into biosolids and treated water. Inevitably about half of the biosolids (3.5 million tons in the United States alone) is sent to landfills or incinerated, while the other half is used as fertilizer. [The Poop on Pooping: 5 Misconceptions Explained]

Kathleen Smith, a USGS geologist, thinks people could make more of these biosolids; they're full of tiny particles of metals that find their way into waste through beauty products, detergents and even odor-resistant clothing.

There are two good reasons to try to pull these metals out of poop, according to Smith, who's presenting her research on the subject at an American Chemical Society meeting this week.

"If you can get rid of some of the nuisance metals that currently limit how much of these biosolids we can use on fields and forests, and at the same time recover valuable metals and other elements, that's a win-win," Smith explained in a statement.

The same chemicals (called leachates) that miners use to pull metals out of rock could be safely used to pull metals from waste, Smith and her colleagues found. The researchers have examined waste samples from small towns in the Rocky Mountains, as well as in rural areas and cities. They detected some sizable concentrations of platinum, silver and gold when they looked at their samples under a scanning electron microscope, they reported.

"The gold we found was at the level of a minimal mineral deposit," Smith said. In other words, if that level of gold were observed in rock, it would be considered a potential mining prospect.

It's not just gold that could be mined and sold. Waste contains elements like vanadium and copper that could be used in devices such as cellphones and computers, the researchers said.

The economic value of poop mining is still unclear, but some recent projections have been promising. Earlier this year, another group of researchers published a paper in the journal Environmental Science & Technology, estimating that metals extracted from poop in a population of 1 million people could yield $13 million per year.