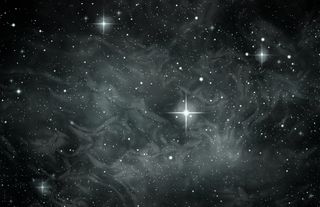 Gravitational waves are ripples in the very fabric of space-time.
(Image: © Shutterstock)

That's the upshot of a series of talks given here Saturday (April 14) at the April meeting of the American Physical Society. The next generation of gravitational wave detectors will peer right up to the outer edge of the observable universe, looking for ripples in the very fabric of space-time, which Einstein predicted would occur when massive objects like black holes collide. But there are still some significant challenges standing in the way of their construction, presenters told the audience.

"The current detectors you might think are very sensitive," Matthew Evans, a physicist at MIT, told the audience. "And that's true, but they're also the least sensitive detectors with which you can [possibly] detect gravitational waves." [8 Ways You Can See Einstein's Theory of Relativity in Real Life]

Current detectors, of course, are nothing to sneeze at. When the 2.5-mile-long (4 kilometers) Laser Interferometer Gravitational-Wave Observatory (LIGO) first detected space-time growing and shrinking back in 2015 — the gravitational echo of a 1.3-billion-year-old collision between two black holes — it proved the existence of the vast, invisible gravitational waves that were once entirely theoretical, and led in just two years to a Nobel Prize for LIGO's creators.

But LIGO and its cousin, the 1.9-mile-long (3 km) Italian instrument Virgo, are fundamentally limited, the speakers said. Both detectors are only really capable of spotting gravitational waves from objects that are relatively near to Earth on the scale of the whole universe, said MIT physicist Salvatore Vitale. They're also limited in the types of objects they can detect.

So far, there have really been just two major results from the current generation of interferometers: the 2015 detection of a black hole merger, and the August 2017 detection of two neutron stars colliding (also a hot topic at the conference). There have been a few more black hole collisions detected, but they haven't offered much in the way of stunning results on top of the first detection.

Build scaled-up, more precise LIGOs and Virgos, or a different kind of large-scale detector called an "Einstein telescope," Evans said, and the rate of wave detection could jump from one every few months to more than 1 million every year.

"When I say these detectors get us out to the edge of the universe, I mean they can detect nearly every binary system which merges," he said, referring to pairs of stars, black holes and neutron stars that are colliding.

That means the possibility of detecting black holes from the very early years of the universe, probing deep mysteries of gravity, and even potentially detecting, for the first time, the gravitational waves of a star going supernova and collapsing into a neutron star or black hole. [6 Weird Facts About Gravity]

LIGO and Virgo are, as Live Science has previously reported, basically giant L-shaped rulers. Two tunnels branch out at right angles from each other, using lasers to make extremely fine moment-to-moment measurements of the tunnels' lengths. When a gravitational wave passes through the detector, wiggling space itself, that length changes a tiny bit. What was once a mile becomes, briefly, slightly less than a mile. And the laser, traversing that shorter distance slightly faster, demonstrates that the change has happened.

But there's a limit to just how fine that measurement can be. Most waves ripple the laser far too slightly for the interferometers to notice. Improving the detection technology in LIGO and Virgo's existing tunnels can improve matters somewhat, Evans said, and there are plans to do that. But to really amplify the signal, he said, the only option is to go much bigger. [Hunting Gravitational Waves: The LIGO Laser Interferometer Project in Photos]

An L-shaped detector with 24.86-mile-long (40 km) arms, 10 times the size of LIGO, is the next step, Evans said. He called the proposal a "cosmic explorer." It would be big enough to detect just about anything a gravitational wave detector could possibly detect, he said, but not so big that the underlying physics start to fall apart or the costs become unfeasibly high, even for this sort of eye-bleedingly expensive science project. (The final cost of LIGO ran into the hundreds of millions of dollars.)

So why a detector of that size, rather than twice or 10 times as big?

At a certain point, about 24.86 miles (40 km) long, Evans said, the light takes so long to move from one end of the tunnel to the other that the experiment can become fuzzy, making the results less precise rather than more.

At least as challenging are the costs. LIGO and Virgo are small enough that the curvature of the Earth wasn't a significant construction challenge, Evans said. But at 24.86 miles (40 km) per arm, putting the ends of each tunnel at ground level means that the centers of the tunnels have to be 98.43 feet (30 meters) underground (assuming the ground is perfectly level).

"Over 40 kilometers," Evans said, "the trucking distance of dirt [out of the long tunnel] starts to take over costs."

There's also the basic problem of finding a flat empty space large enough to build such a large detector. Evans said there's basically nowhere in Europe big enough, and in the US the options are limited to the region of the Great Salt Lake in Utah and the Black Rock desert in Nevada.

Those space challenges drive the alternative massive gravitational wave detector design, called the Einstein telescope. While an L shape is the best way to measure a gravitational wave, Evans said, a triangle with three tunnels and multiple detectors can do nearly as good a job while taking up a much smaller space, ideal for the geographical limitations of Europe.

These detectors are still 15 to 20 years away from completion, Vitale said, and all the technology necessary to build them hasn't yet been invented. Still, he and Evans both told the assembled scientists that "the time is now" to start working on them. Already, Vitale said, there are  eight working groups preparing a report on the scientific justification for such massive devices, due out in December 2018.

One member of the audience asked Evans whether it made sense to build, say, an 5-mile-long (8 km) detector while a true Cosmic Explorer or full-scale Einstein Telescope remains more than a decade away.

If he were on a funding committee, he wouldn't approve such a project, because the scientific returns from doubling LIGO's size just aren't that big, Evans said. It's only at the upper limits of tunnel size, that the costs of such a project would be justified, he added.

"Unless I knew that for some reason [an 8-km detector would be the largest ever realistically possible to build], it's just not worth it," he said.

Still, Vitale said, that doesn't mean scientists have to wait 15 to 20 years for the next major phase of gravitational wave results. As more detectors on the current scale come online, including the Virgo-sized Kamioka Gravitational Wave Detector (KAGRA) in Japan and the LIGO-sized LIGO-India, and as the existing detectors improve, researchers will have the opportunity to measure individual gravitational waves from more angles at once, enabling more detections and more detailed conclusions about where they come from.