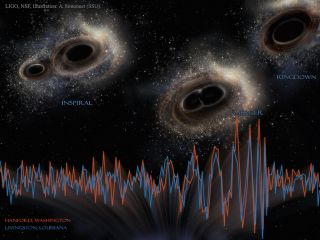 A new illustration shows how a brief blip in a signal from the Laser Interferometer Gravitational-Wave Observatory revealed the inspiraling and merger of two black holes.
(Image: © LIGO, NSF, Aurore Simonnet (Sonoma State U.))

Earlier today (Feb. 11) researchers announced the discovery of the elusive, long-sought ripples in space-time that were predicted by Einstein's theory of general relativity more than a century ago.

"We have detected gravitational waves," David Reitze, a physicist at the California Institute of Technology, said today in a news briefing. "We did it!"

The telltale signs of relativity in action showed up as a teensy blip in the data from the Laser Interferometer Gravitational-Wave Observatory — a set of two separate detectors in Hanford, Washington and Livingston, Louisiana. Researchers then used Einstein's equations to reconstruct the galactic event that caused this ripple in the fabric of space-time. [8 Ways You Can See Einstein's Theory of Relativity in Real Life]

From noise to signal

To recreate the stunning image, scientists first started with the messy, ugly signal at the bottom of the image. It looks like random noise to the untrained eye — but the faint uptick in the signal around the middle is actually the signature of a violent cosmic event: the galactic smashup of two black holes merging.

The LIGO first detected the signal at its Livingston, Louisiana, location on Sept. 14, 2015, then again, 7 milliseconds later at a separate detector in Hanford, Washington.

To understand what the image shows it's helpful to understand how the LIGO works. The detector splits a laser beam into two beams that travel down separate 2.5-mile-long (4 kilometers) passageways, before bouncing off mirrors and intersecting at a light detector. Without any other disturbances, the two beams should arrive at that light detector at the same time. But the Sept. 14 gravitational waves created brief fluctuations in the length of those passageways, which changed when the two beams of light arrived at the beam splitter.

"This signal is seen: you can see it even by eye above the ever-present rambling noise that we have in the detector," said Gabriela González, the spokesperson for the LIGO scientific collaboration, in a news briefing. "We know it's real because 7 milliseconds later we saw this same thing in the Hanford detector."

The signal shows a rise in fluctuations that grow more frequent and more powerful before eventually settling down.  The fluctuations are in units of strain, or the change in length of the detectors' passageways over the original length. In this instance, the fluctuations in distance detected by LIGO were about a thousand times smaller than the diameter of a proton.

The team then used Einstein's general relativity equations to create computer simulations of what celestial objects caused the waves, when the event occurred, and exactly how it proceeded.

Based on the frequency, the team deduced that the colliding objects were black holes that started with an initial mass of 29 and 36 times the mass of the sun, respectively, Gonzalez said. The amplitude reveals how distant this cosmic collision is from Earth — and it turns out this smashup occurred 1.3 billion years ago.

The left-hand side of the image shows the two black holes "inspiraling," meaning that as they rotated around each other, the distance between them decreased and they twirled faster and faster.

As the two merged, which is illustrated in the central portion of the image, they ultimately reached half the speed of light, and in a huge reaction, annihilated an amount of mass three times as big as the sun, converting it to energy that shuddered through space-time in the form of gravitational waves. These waves then raced through the galaxy, finally reaching Earth 1.3 billion years later.

The right-hand side of the image shows the final stages of the merger, called the ringdown. At this point, the merged black hole rings like a bell, but this ringing gradually decreases as more energy is transmitted in the form of gravitational waves.