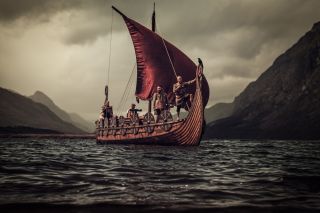 Viking navigators guided by mysterious crystal "sunstones" may have accidentally sailed on to the mainland of North America while looking for Greenland, according to new research.

The new study shows that so-called sunstones — crystals of translucent minerals like Iceland spar, which split the polarization of light passing through them — would have been "surprisingly successful" as navigation devices, by revealing the position of the sun on cloudy days, a common occurrence in the North Atlantic Ocean.

The Vikings had no knowledge of the use of magnetic compasses for navigation at sea.

But observations with these crystal sunstones might have helped Viking ships steer a course due west from Norway to Greenland, the site of several Viking settlements after the 10th century, said Dénes Száz, an optical physicist at Eötvös Loránd University in Budapest, Hungary.Száz is the lead author of the new study, published in the journal Royal Society Open Science this month. [7 Secrets of Viking Seamen]

Computer simulations showed that Viking navigators who made observations of the position of the sun at least once every 3 hours had a very high chance of sailing due west and reaching the coast of Greenland, Száz told Live Science in an email.

But Vikings who made observations of the sun less frequently ran the risk of drifting south and missing Greenland altogether — and, if they didn't all die at sea first, of eventually reaching the coast of Canada.

"Through archaeological findings, we know for sure that the Vikings were present in North America centuries before Columbus," Száz said. "But we do not know whether they got there through such a misnavigation, or started discovery expeditions from previous colonies on Greenland."

For the new study, Száz and co-author Gábor Horváth, also of Eötvös Loránd University, ran 36,000 computer simulations of Viking-ship voyages across the North Atlantic, to determine the expected success of navigations guided by sunstones.

Their research builds on earlier studies that measured the human error involved in navigating with sunstones of Icelandic spar and other translucent crystals that create a double or bright single image, depending on the polarization of the light passing through them.

Száz explained that, while there is little archaeological evidence for the use of such crystals by Viking navigators, the 13th-century Icelandic saga of St. Olaf described mysterious sunstones — sólarsteinn, in Old Icelandic — that were used in cloudy or foggy weather to find the position of the sun.

Viking navigators are thought to have used a nonmagnetic sun compass to measure the angle of the sun at midday, which would have enabled them to steer along a constant line of latitude — due west from Norway to Greenland, for example.

But because the North Atlantic is plagued by cloudy weather and fog for much of the year, the sun often can't be seen for days or weeks at a time.

In a hypothesis proposed in 1967 by Danish archaeologist Thorkild Ramskou, Száz said, Viking navigators could find the sun on cloudy days by rotating sunstones in front of the sky and observing where the images in the crystals aligned or brightened.

The computer simulations of Viking voyages revealed that sunstones used to find the position of the sun on cloudy days would have been "surprisingly successful" as navigation aids, especially when the observations were made at least every 3 hours and taken evenly around midday. [Images: Viking Twilight Compass Helps Navigate North Atlantic]

The simulations showed that Vikings from Norway who kept to this regular schedule of observations could sail close enough to due west to reach the coast of Greenland in three to four weeks, Száz said. "We showed that if the navigation periodicity was 1, 2 or 3 hours, the navigation success was very high, between 80 and 100 percent," Száz said.

But the research also showed that Vikings who made sun observations only every 6 hours or more, or none at all, tended to stray south on their voyages, with a very high chance that they might have sailed right past Greenland entirely.

If that happened — and if the Vikings on board did not perish from thirst, hunger or storms at sea — some of those Viking voyages might have sailed all the way to the coasts of what are now Labrador and Newfoundland in Canada, Száz said.

The computer simulations used in the current research took into account weather changes, the different mineral types of sunstone that might have been used, and the times of year when the voyages between Norway and Greenland were undertaken.

Future research would add factors to the simulations, including the effects of storms, water currents and varying winds, he said.