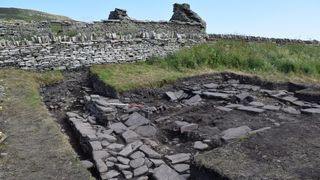 There was likely no shortage of ale and good cheer at a recently unearthed Viking drinking hall, discovered by archaeologists on the island of Rousay, Orkney, in northern Scotland.

The hall wasn't a short-lived establishment, either. Its doors seem to have been open from the 10th to the 12th centuries, likely serving high-status Vikings, the archaeologists said.

Now, all that's left of this once bustling alehouse are stones, a handful of artifacts — including a fragmented Norse bone comb, pottery and a bone spindle whorl — and very old trash heaps, known as middens.

Archaeologists discovered the beer hall this summer, after learning that walls extending from below a known settlement were actually part of a large, 43-foot-long (13 m) Norse building. These walls were about 3 feet (1 meter) wide and 18 feet (5.5 m) apart. Stone benches sat on the sides of the building, they noted.

The drinking hall was found at an archaeological hotspot at Skaill Farmstead, a place that has likely been inhabited by people for more than 1,000 years. That's why a team of archaeologists from the University of the Highlands and Islands archaeology institute, Rousay locals and students have been digging there for years; they are often sifting through the middens to learn about old farming and fishing practices, as well as what sorts of foods were eaten by the people who lived there.

"We have recovered a millennia of middens, which will allow us an unparalleled opportunity to look at changing dietary traditions, farming and fishing practices from the Norse period up until the 19th century," project co-director Ingrid Mainland, an archaeologist at the University of the Highlands and Islands, said in a statement.

Excavations at the drinking hall are ongoing, but it's already showing similarities to other Norse halls found in Orkney, as well as other parts of Scotland. Moreover, the farmstead is part of the Westness on Rousay, a coastal stretch on the island. Westness is mentioned in the Orkneyinga saga as the home of Sigurd, a mighty chieftain, the archaeologists said.

Perhaps, Sigurd frequented the drinking hall, the archaeologists added. "You never know, but perhaps Earl Sigurd himself sat on one of the stone benches inside the hall and drank a flagon of ale!" project co-director Dan Lee, an archaeologist at the University of the Highlands and Islands, said in the statement.