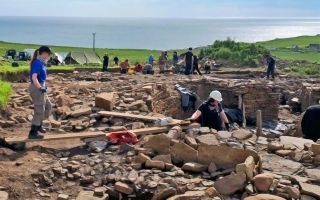 Archaeologists excavate The Cairns, next to the North Sea in Scotland, where Iron Age people had a grand feast about 1,700 years ago.
(Image: © Archaeology Institute, University of the Highlands and Islands)

About 1,700 years ago, Iron Age cooks served a massive, meaty feast along the Scottish coast of the North Sea, offering guests a spectacular view as they chowed down on sheep, pig and otter, and even received party favors — metal rings and brooches to wear, archaeologists report.

Researchers made the discovery when they found the aftermath of the feast — a trash heap filled with about 11,000 fragments of animal bone. They also uncovered metalwork supplies from the same time period.

"It's so closely contemporary, it looks like the remains of the animal bones are part of a feast that celebrates this great metalworking episode," Martin Carruthers, the site's excavation director and a lecturer in archaeology at Orkney College, University of the Highlands and Islands in Scotland, told Live Science. [Photos: Gold, Amber and Bronze Treasures Found in Iron Age Grave]

Archaeologists made the finding while they were excavating The Cairns, an archaeological site in South Ronaldsay, one of the Orkney Islands, which sit off the northern coast of Scotland. Researchers have known about the site since 1901, but it wasn't until 2017 that scientists made a prize find: They unearthed 60 molds used for metalworking, as well as the remains of furnaces and crucibles, containers used to melt metal at high temperatures. They also found ancient metalwork, including bronze pins and brooches, as well as the animal bones and broken pots lying next to and over the metalworking area.

A radiocarbon analysis of the animal bones dated them to about A.D. 300, Carruthers said. However, the site itself is much older and was probably occupied since at least the first century B.C., he noted.

The discovery of the feast and party favors"tells us that these people had a very complex social life," Carruthers said, noting that perhaps high-status individuals received certain kinds of jewelry. In effect, this large social event would have defined the social hierarchy and united the community, he said.

Granted, the researchers' discovery of roughly 11,000 bone fragments doesn't mean that ancient people butchered thousands of animals, but "even hundreds of animals represents an astonishing volume of meat that's being culled and distributed for a relatively short event," Carruthers said.

An analysis of the bones reveals the Iron Age feasters were eating domesticated animals, such as cattle, sheep and pig, as well as red deer, otter, seal, whales and even horse. Broken pottery vessels found at the site suggest that the Iron Age people washed down the enormous meal with an alcoholic beverage, Carruthers said.

"It's quite possible they were sitting there, eating their feast and, at the same time, drinking all sorts of beverages that oil the wheels of society, as it were," he said.

Furthermore, the bone fragments didn't appear to be hugely processed, meaning Iron Age cooks weren't breaking up every bone to extract its marrow, "which is something you get when people are pretty keen to get all the caloric value out of the food," Carruthers said. "The fact that they're actually being quite wasteful with this meat source is an indication of wealth and status."

The discovery of the feast is remarkable, but archaeologists aren't done with the site yet. This year, they plan to excavate the lower levels of the site and its surrounding settlements, Carruthers said.