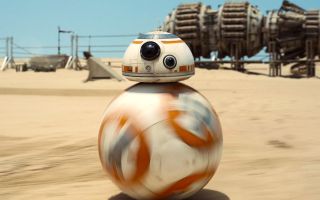 WASHINGTON — BB-8, the endearing recent addition to the "Star Wars" droid family, rolled off movie screens and straight into audiences' hearts when it appeared in two of the enduring franchise's recent films: "The Force Awakens" (Lucasfilm, 2015) and "The Last Jedi" (Lucasfilm, 2017).

But when the spherical droid's creators set out to build the charismatic robot, they had no idea that it would become so popular so quickly, audience members at Future Con learned on March 31.

At the panel "BB-8 and the Future of Droids," two of the engineers behind BB-8 — Joshua Lee, who worked on the movies as a senior animatronic designer, and Matt Denton, who served as the films' electronic design and development supervisor — explained how BB-8 came to life. They also told how they guided the droid through complicated scenes with its human co-stars, sharing stories of some of BB-8's most memorable moments on and off camera. [R2-D2 Gets Real: 'Star Wars' Droids Already Exist]

It certainly would have been possible to model and animate BB-8 using computer-generated imagery (CGI). But the film's director, J.J. Abrams, felt very strongly that the droid was important enough to the story that it needed to be a physical presence, Lee said. That way, the actors could interact with the robot directly, Lee added.

Lee said there was a lot of secrecy when he was brought on board for "The Force Awakens." He was told that he would be working on a new robotic character vaguely described as "a tricky droid," he told the panel audience.

Denton joined the team a few weeks later. The original concept drawing for a remote-controlled, rolling robot didn't provide the designers with a lot of detail; it showed two roughly penciled spheres, one stacked on top of the other, with something resembling a face sketched onto the "head" sphere.

The team created more-detailed concept sketches as they refined the design of BB-8's rolling body and mobile head, experimenting with different head sizes and different arrangements of sensors that would serve as the droid's facial features. The film's production team was already planning for BB-8 to emerge as a breakout star, but Lee and Denton didn't know about that yet, they told the audience at Future Con.

"We would have panicked," Denton said.

They ended up designing seven versions of BB-8; six of them appeared in the film, and each one had an unofficial nickname, Denton explained.

The version named "Puppet" had a puppeteer connected to it and was used when the robot's movement required human manipulation and control. The "Left and Right Trike" builds had two-wheeled rigs attached, on either side, to stabilize the remote-controlled droid during moving shots. The animatronic "Wiggler" was a fixed model with a plate on the bottom, but it could twist and turn and was used for close-ups. The static "Lightweight" model could be easily carried, while "Stunt," also static, was more durable.

And the "Bowling Ball" version of BB-8 operated just as its name implies. "You'd just lob it through the shot," Lee said.

Finally, there was "Red Carpet" BB-8. Built after production wrapped, this remote-controlled model was designed for appearing at public events.

Once all versions of the droid were built, Denton and Lee had to figure out how to get BB-8 to perform in tricky situations, particularly during the desert scenes on a floodplain in Abu Dhabi. There, winds would whip sand and salt into BB-8's every crevice and crack, and it was so hot that the soles melted off the crew's boots, Lee and Denton said.

With so much behind-the-scenes detail to absorb, the audience hung raptly on the speakers' every word — that is, until Lee and Denton announced the arrival of a special guest. When BB-8 (the "Red Carpet" version of the droid) rolled out onto the stage to say hello, audience members leaped up to photograph the chirping 'bot. It took a few minutes before everyone settled down and went back to their seats.

Lee and Denton's efforts to not only build a working droid — seven of them, in fact — but also create a likable character clearly worked. As production for "The Force Awakens" wrapped for BB-8, the little droid proved to already have plenty of fans among the cast and crew, Denton told the audience. On BB-8's last day of shooting, after the droid's final scene, the film crew gave the robot a resounding round of applause — a film ritual usually reserved for human actors.

While they cheered, Denton lifted BB-8 over his head (the production had been using the Lightweight model that day), and then carried the little droid through the crowd. As he did, they began singing the theme from "The Lion King," recalling the moment in the animated film when young Simba was held aloft to the kneeling animals on the savannah.

"You never imagine that happening in your career," Denton said. "I don't think it could happen twice."