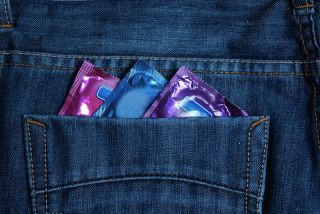 Editor's note (April 4): The "condom snorting challenge" is not actually a current trend among teens. The story gained traction after a local news crew attended a class for parents in San Antonio that warned of dangerous online trends, according to the Chicago Tribune. The condom snorting challenge was shown as an example of a dangerous online trend, but it not a trend that is currently captivating teens across the country. That said, it's still a bad idea to snort a condom up your nose.

Live Science's original story is below.

Getting teens to use condoms is usually a good thing — unless they plan on snorting them up their noses. That would be a really bad idea.

But some teens are reportedly doing just that: In videos posted on social media, teens are inhaling condoms up their nostrils and pulling them out of their mouths, according to USA Today.

This practice is not only gross, it's also potentially dangerous. As Live Science has previously reported, there are few things that you ever want to put up your nose.

"It's not generally a good idea to put anything in your nose that doesn't belong there" or isn't prescribed by a doctor, Dr. David Hiltzik, director of otolaryngology at Staten Island University Hospital in New York, told Live Science in a 2017 interview about the dangers of snorting chocolate powder. Snorting substances up your nose can cause irritation to the nose, throat and lungs, Hiltzik said. [9 Weird Ways Kids Can Get Hurt]

In addition to this hazard, inhaling condoms could pose a dangerous choking risk, according to Dr. Bruce Y. Lee, an associate professor of international health at Johns Hopkins Bloomberg School of Public Health, and contributor to Forbes.

"The condom could easily get stuck in your nose or your throat, blocking your breathing or causing you to choke," Lee wrote in Forbes.

Lee also pointed to several previous cases in which condoms caused serious complications when they were accidentally inhaled. For example, in 2004, doctors in India reported that a 27-year-old woman developed pneumonia and a collapsed lung after she accidentally inhaled a condom.

The "condom snorting" trend is not exactly new — some videos of teens engaging in this dangerous "challenge" appear as far back as 2007, according to Yahoo News. But the trend has recently reemerged.

Educators in San Antonio are now teaching parents about dangerous online trends, including the condom snorting challenge, in an effort to increase awareness about the hazards of these trends, local news outlet KABB-TV reported.

"These days our teens are doing everything for likes, views, and subscribers," educator Stephen Enriquez told KABB. "As graphic as it is, we have to show parents because teens are going online looking for challenges and recreating them."