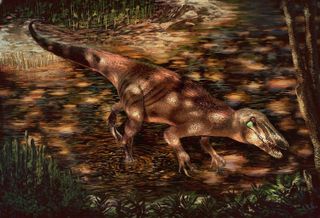 A truck-size dinosaur that sported sharp, long claws the length of bowling pins once tore across the South American landscape, terrorizing animals it hoped to eat about 85 million years ago, a new study finds.

But besides the dinosaur's fearsome, Wolverine-like claws, its discovery has enthralled researchers for another reason: Little is known about its group, Megaraptoridae, which were mysterious carnivorous dinosaurs that lived during the middle to late Cretaceous, the last period of the dinosaur era.

"It was one of the last megaraptorids that lived on our planet and one of the largest in size for its time," study lead researcher Juan Porfiri, coordinator at the Museum of Natural Sciences at the National University of Comahue in Argentina, told Live Science. [Image Gallery: Tiny-Armed Dinosaurs]

The large theropod (a group of mostly meat-eating, bipedal dinosaurs that includes Velociraptor and Tyrannosaurus rex) was found in 2006 by Diego Rosales, a technician at the National University of Comahue. A team then excavated the bones at Tratayén, a town in Argentina's Neuquén province, in northwestern Patagonia.

The researchers named the newly identified dinosaur Tratayenia rosalesi, after the region where it was found and the name of its discoverer.

During its lifetime, T. rosalesi would have measured nearly 30 feet (9 meters) long and sported powerful, 16-inch-long (40 centimeters), scythe-like talons on the innermost two fingers of each hand, the researchers said. These enormous claws likely helped the dinosaur catch and subdue prey, including other dinosaurs, which it then ate with its sharp teeth that were serrated, like steak knives.

"Megaraptorid claws are the stuff of nightmares — razor-sharp meat hooks more than a foot long," study co-leader Matt Lamanna, a paleontologist at the Carnegie Museum of Natural History in Pittsburgh, said in a statement. "Wolverine from the X-Men has nothing on these guys."

The dinosaur's giant size made it one of the largest and deadliest predators in southern South America from about 95 million to 85 million years ago, the researchers said.

"The vertebrae of Tratayenia are about as gorgeous as dinosaur fossils get, and they've got some pretty weird features to boot," Lamanna said. "We definitely wish we had more of this thing, but what we do have is awesome."

While the fossils of T. rosalesi may not solve this puzzle, it's only a matter of time before more megaraptorid fossils help researchers figure it out.

"Tratayenia is just one of many exciting megaraptorid fossils that have been found in recent years," Porfiri said in the statement. "After these specimens are studied, many questions surrounding these puzzling meat-eaters may finally be answered."

The study was published online March 20 in the journal Cretaceous Research.