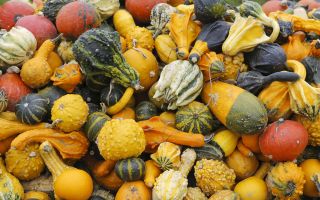 There wasn't anything particularly unusual about the squash — just a slightly bitter taste. But that all changed when two women in France started losing their hair.

The women didn't know each other, nor did they get their squash from the same seller. Still, they both developed what's known as cucurbit poisoning, or "toxic squash syndrome," according to a new report of the two cases, published today (March 28) in the journal JAMA Dermatology.

In one of the cases, a woman and her family developed symptoms of food poisoning — nausea, vomiting and diarrhea — hours after eating a bitter-tasting pumpkin soup. About a week later, the woman experienced substantial hair loss that affected a large part of her scalp, but none of her family members lost their hair. [27 Oddest Medical Cases]

In the second case, another woman had severe vomiting about an hour after eating a bitter-tasting squash, but no one else who ate the vegetable got sick. Roughly three weeks later, she lost a massive amount of hair from her head, as well as from her underarms and pubic area.

As it turns out, some members of the Cucurbitaceae family — which includes pumpkins, squash, melons and cucumbers — can produce a group of chemicals known as cucurbitacins. Not only do these chemicals taste bitter, but they can also have toxic effects on human cells.

Normally, farmers cultivate these plants to produce little to no cucurbitacins, because people don't like the bitter taste. But in some situations, such as when there's accidental cross-pollination of crops or when plants grow in the wild, some varieties may contain high levels of the chemicals. This creates a potentially toxic, bitter-tasting, inedible food.

The problem, however, is that the bitter-tasting vegetable looks no different from a normal one, and a person can't tell the difference until they take a bite.

Although it's rare, other cases of cucurbit poisoning have been described in the medical literature; in those cases, people developed food poisoning after eating bitter-tasting squash, zucchini and other gourds, according to the new report. But these are the first two reported cases linking the consumption of bitter-tasting gourds with hair loss, according to the case report author, Dr. Philippe Assouly, a dermatologist at Saint-Louis Hospital in Paris. [7 Foods You Can Overdose On]

Assouly wrote that he suspects that toxic compounds in the plant have a similar effect on hair follicles as do some chemotherapy drugs, which can lead to temporary hair loss.

But because hair loss is a completely new observation that is potentially associated with exposure to cucurbitacins, it's not clear why it occurred in these cases, said Dr. Zane Horowitz, a toxicologist and medical director of the Oregon Poison Center in Portland, who was not involved in the case. Cucurbit poisoning is a very rare syndrome, and the toxin involved has not been well-studied, Horowitz noted.

In 2012, emergency room physicians at Oregon Health & Science University saw two patients with toxic squash syndrome, both of whom had eaten squash from a home garden. The physicians then reviewed the records from the Oregon and Washington state poison centers and identified about 17 other cases of cucurbit poisoning that had occurred over a 12-year period.

In a more recent review, published in January 2018 in the Journal of Clinical Toxicology, a French poison center reported more than 350 cases of food poisoning linked with bitter-tasting squash that took place between 2012 and 2016. About 56 percent of those cases involved squash purchased at a store, and in 26 percent of the cases, the vegetable came from a home garden, according to the findings.

Squash lovers need to be aware that if they eat one of these popular vegetables and it tastes bitter, they should stop eating it immediately, Horowitz told Live Science. What's clear in all these case reports is that high levels of the toxin make vegetables taste bitter, and those high levels of toxin can put a person at highest risk for symptoms, he said.

As for the two French women who lost their hair, the hair on the head of the woman who ate the pumpkin soup had regrown less than 1 inch (2 centimeters) two months after the incident. The second woman had regrown short hair, of more than 2 inches (6 cm), on most areas of her scalp six months later.