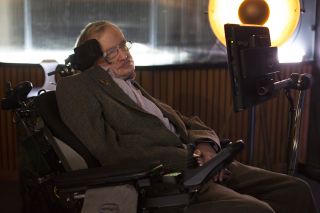 In one of his last television appearances, Stephen Hawking poses the question of how people might one day live on planets other than Earth.
(Image: © Smithsonian Channel)

The computer-generated voice of the late physicist Stephen Hawking will address audiences once again from their television screens on March 25, during his appearance in one of the last TV projects of his life.

In the Smithsonian Channel documentary "Leaving Earth: Or How to Colonize a Planet," Hawking shares his long-held vision of humanity confronting an uncertain future on Earth by looking to the stars, and setting a course that will lead us to one day inhabit distant worlds beyond our own solar system.

Where we would go, how we would get there and what it would take to make an alien planet habitable are just a few of the questions that Hawking and other scientists address as they confront the challenges that people would face in order to colonize Earth 2.0. [Stephen Hawking: A Physics Icon Remembered in Photos]

"Leaving Earth" explores how scientists are working to identify "goldilocks" planets — worlds that are neither too close to their host star nor too far away (not too hot, not too cold), with liquid water on their surface. But identifying planets that could be likely candidates for supporting human life is just the beginning. Experts speaking on "Leaving Earth" also introduce research that could inform future designs for spacecraft capable of transporting us beyond the reaches of our own solar system. And novel technologies offer solutions for protecting and sustaining us in space and for terraforming alien planets as we lay the foundations for new human civilizations.

Hawking often talked about the idea of humanity securing its future by colonizing other worlds. In November 2016, he delivered a speech at the Oxford University Student Union suggesting that climate change, the threat of nuclear weapons, pollution and other environmental risks were swiftly rendering Earth uninhabitable, and that our species had only about 100 years left. Our only hope, he told the audience, was finding another planet to call our home.

"He'd spoken about it many times," Haken said. "The team at Brook Lapping worked up that idea into something that could be a film, and then approached Stephen Hawking and asked if he'd take part."

The production team developed the script with Hawking, and his segments were filmed over two days near his office in the math department at the University of Cambridge, Haken said. What emerged was both intriguing and frustrating, Haken recalled — while Hawking posed fascinating and tough questions about how people could go about departing Earth and migrating to new worlds, he didn't offer them any solutions for how that might happen, she told Live Science.

"Our hosts came up with potential ideas as to how we might go about approaching this problem, but Professor Hawking hadn't really suggested a plan for how we'd do this," she said. "He was putting it out there to the world as an almost provocative question that he thought we ought to be investigating, but I think he was also quite playful in the way that he wanted other people to take it and run with it."

Billions upon billions of people

Life first emerged on Earth more than 3 billion years ago, and modern humans — Homo sapiens — didn't arrive on the scene until about 300,000 years ago, according to the fossil record. Since then, our numbers have swelled to more than 7 billion, and the global human population is expected to reach 9 billion by 2050, according to the United Nations Population Division.

A dozen people have walked on the moon, but we have yet to establish an off-planet colony within our own solar system. However, the history of humanity is one that embraces movement and migration, as people emerged from Africa hundreds of thousands of years ago and crossed continents and then oceans, establishing footholds in diverse environments nearly everywhere on Earth.

Perhaps viewed in that context, Hawking's dream of humans populating other planets within the foreseeable future isn't so far-fetched after all, and may just be the natural extension of a process that humanity has followed since its earliest days, Haken said.

"The colonizing of continents started with pioneers, and then others would come. It's all about moving in steps and waves," she said. "At the moment, going to live outside our planet seems unthinkable. But actually, if you take those steps one at a time, maybe it is doable after all."

"Leaving Earth: Or How to Colonize a Planet" airs March 25 at 8 p.m. local time on the Smithsonian Channel.