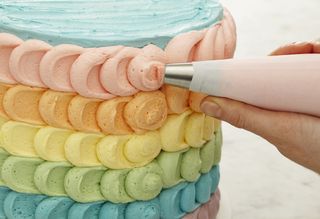 A knife slices through a block of colorful "kinetic sand," creating perfectly symmetrical squares. Someone snips apart two tubes of lipstick and mixes them into a stretchy ball of slime. A cake decorator pours shiny fondant all over a delicious-looking confection.

If any of this sounds appealing, you may be the target audience for #oddlysatisfying videos, a genre that has spread across YouTube, Twitter and Instagram. These videos don't always share a lot in common — some are set to rapid trance music, others highlight the ambient noise of whatever is on-screen — but they all seem to relieve a certain psychological itch.

There aren't any studies on #oddlysatisfying videos, but a few psychology studies hint at what people might be getting out of the experience. [10 Things That Make Humans Special]

"From a theoretical standpoint, it does make sense that it could be calming," said Jessica Gall Myrick, a media psychologist at The Pennsylvania State University. "And it could be interesting and aesthetically pleasing, too."

On the surface, many videos tagged as "satisfying" are … kind of dull. Ten minutes of slicing through sand seems like a bit of a drag in a digital world of instant updates and automatic refreshes.

That may be precisely the appeal, Myrick said.

"Even if you don't consciously realize you're stressed, your body is aware that you're stressed or physiologically aroused," she told Live Science, using the scientific term for being in a state of high alertness. "That could drive you toward this type of soothing, interesting content."

There are analog versions of this sort of relaxing, repetitive activity. Tibetan Buddhists, for example, spend painstaking hours making colorful designs called mandalas out of sand, which are then destroyed to symbolize the transitory nature of life. The rock gardens that Zen Buddhists traditionally create also often involve pleasing designs raked into sand. Videos don't have the tactile sensations of real-world activities, of course, but they do often integrate sound, like the crunching of sand or the squishing of slime. Some people even say they get a pleasing sensory "tingle" from these videos, a sensation dubbed autonomous sensory meridian response, or ASMR. [Top 10 Mysteries of the Mind]

The term ASMR was coined by a layperson, not a psychologist, but the phenomenon has been studied a few times by professionals. One survey, published in 2015 in the journal PeerJ, suggests that people who experience synesthesia are more likely to say they experience ASMR. (Synesthesia is a cross-reaction between senses, as when someone automatically associates a letter with a certain color, or smells a scent when hearing a particular sound.)

That survey of 475 ASMR-video-watching volunteers also found that 80 percent of those people said ASMR videos improved their mood while watching the videos and for a few hours afterward. Mood improvement appears to be a significant motivation for YouTubers and all sorts of social media consumers. In 2015, Myrick published a paper in the journal Computers in Human Behavior on why Internet users love cat videos. After surveying 6,795 cat-video-lovers, she found that cat videos boosted viewers' energy and their positive emotions.

Similarly, #oddlysatisfying videos might trigger novel emotions, Myrick said. Curiosity and interest are both emotions, she said, and these videos tend to show things that most people might not see in their daily lives. Many feature specialties like cake decorating or wood working. Some show potters at the wheel or robotic assembly lines in factories. This kind of imagery can draw people in just by drawing back the veil on how things are made or how they work, Myrick said.

If there is another common thread to videos under the #oddlysatisfying hashtag, it's symmetry and completion. In one compilation on the YouTube channel 'Oddly Satisfying,' things are covered completely (a hand with metal magnets, a sphere with some sort of liquid goo, or a container is filled up (a bottle of nail polish, a jar of honey). In others, designs complete themselves or a drill team forms geometric patterns.

Humans like symmetry, so #oddlysatisfying videos may be satisfying for their aesthetic value alone. That said, it's not really clear why symmetry is psychologically soothing. Evolutionary psychologists have theorized that perhaps symmetrical faces are an indication of good health, but the actual evidence linking symmetry and health is slim. Another theory is that the brain prefers symmetry because symmetrical things are easier for it to process, though that, too, is up for debate.

Completion also seems to appeal to some psychological need. In a 2017 study in the Journal of Behavior Therapy and Experimental Psychiatry, researchers asked participants to write all the words they could remember from a list they'd previously seen, ostensibly as a memory test. In some cases, they stopped the participants from completing the list, triggering a feeling of incompleteness.

The inability to complete the list bothered people. In fact, two participants who had been diagnosed with obsessive-compulsive disorder actually emailed the study authors after the fact with a complete list, because they couldn't bear to think that the task remained undone. Even the participants without psychological diagnoses reported negative emotions and feelings of actual physical discomfort at not being able to finish what they'd started.

With #oddlysatisfying videos, gratification of these psychological urges is as simple as pulling out a smartphone.

"It's just so easy and available, anytime, anyplace," Myrick said.