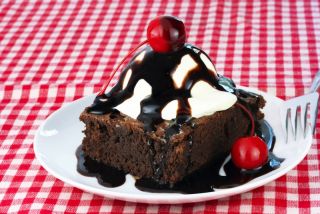 SAN FRANCISCO — The idea that eating certain foods make us feel better when we're down may be a myth, psychologists say.

In fact, we may simply feel better after some time has passed, regardless of what food we eat, a new study says.

The participants then watched a 20-minute video intended to elicit feelings of sadness, anger and fear. They rated their mood immediately after the video, and three minutes later. In those three minutes, they were served either their comfort food, a food they liked, a granola bar, or no food at all. (All participants received their comfort food during one visit, but received different foods on subsequent visits when the experiment was repeated.)

As expected, participants were in a bad mood immediately after watching the video. Three minutes later, their mood improved, regardless of whether they had their comfort food, another food, or no food at all.

"We were incredibility surprised by those results," said study researcher Heather Scherschel Wagner, a doctorate candidate at the University of Minnesota, who presented the results here at the Association for Psychological Science meeting. Prior to the study, the researchers believed that there was something to eating comfort food, said Wagner, who noted that her own comfort food was her mom's French onion soup.

But the new findings suggest that "whether it's your comfort food, or it’s a granola bar, or if you eat nothing at all, you will eventually feel better. Basically, comfort food can't speed up that healing process," Wagner said.

It makes sense that people would attribute an improvement in mood to something they ate, without realizing that the food wasn't necessarily responsible for the mood change. "[People] like to find explanations for things," Wagner said.

The new findings suggest that people may not be helped by turning to unhealthy foods, high in calories and fat, when they're down. "People can develop these very unhealthy habits, where they just immediately reach for these yummy foods when they feel sad," Wagner said. If people find that they do actually feel better without eating comfort foods, that might stop this unhealthy pattern of behavior, she said.

However, the study was conducted in a lab setting, so the findings may not hold true for the variety of stressors that people experience in the real world, such as stressors that occur over a long period of time. The researchers plan to conduct another study to see if comfort foods help people with social stress, such as the stress of feeling socially excluded.