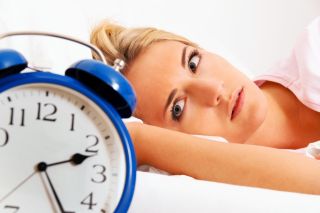 A bad night's sleep makes people less resistant to unhealthy foods, and even results in more pleasure from indulging, according to two new studies.

"Our data strongly suggests that if you're trying to control your weight, being sleep-deprived is not good for you," said study researcher Marie-Pierre St-Onge of the New York Obesity Researcher Center.

In St-Onge's study, 25 participants of normal weight spent five nights in a lab, alternating between getting nine hours of sleep, and four hours.

Participants were shown photos of foods generally perceived to be healthy (such as fruits, vegetables and oatmeal) and unhealthy (such as candy, pepperoni pizza and doughnuts).

The researchers found that when allowed to choose their own food, people ate 300 more calories per day, on average, after a night of four hours' sleep.

In the other study, 16 participants were observed after getting either a full night's sleep or staying awake for 24 hours. Participants were shown pictures of food and asked to rate their desire for that food.

Sleep-deprived people said they were more interested in the unhealthy foods, and brain scans also showed impaired activity in the frontal lobe and other brain regions associated with complex decision-making.

"When you're sleep-deprived, you might not make appropriate food choices," said study researcher Stephanie Greer, a graduate student at the University of California, Berkeley. The brain can no longer convince itself that a healthy food is the right choice due to the health benefits, and instead it focuses on taste, the researchers said.

This study did not look at actual decisions people make about what to eat. However, the idea that people would act on their desires for unhealthy food is a "realistic possibility," said Michael Walker, a sleep psychologist at UC Berkeley.

The results of the new studies are in line with previous work but go beyond what's known to show howthe brain reacts to sleep deprivation, said sleep epidemiologist James Gangwisch of Columbia University, who was not involved in the research.

Gangwisch suggested the link between getting little sleep and eating more has its root in evolutionary biology: Human ancestors slept less during summer months, when they had to eat more to fatten up for the winter.

Now "we're fattening up, year round, for a wintertime that never does come," he said.

Research has shown many times that sleep is critical to helping the brain make healthy choices, Wall said.

"I think people are always surprised that sleep isn't just a dormant state, but performs a lot of functions," he said.

Both studies were presented June 9 at a sleep researchers conference in Boston.

Pass it on: Sleeping less makes people more willing to eat unhealthy foods and get greater pleasure from it.