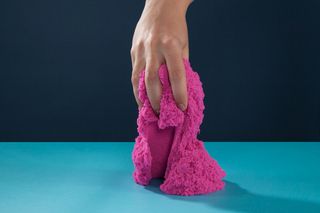 A mesmerizing material called "kinetic sand," which can be molded like clay but also somehow feels silky, is enjoyable for kids and adults alike.

A search on Instagram for #kineticsand, for example, turns up thousands of videos of people slicing, smashing and scooping the stuff, in what looks like a grand sensory experience.

But what gives kinetic sand its transfixing effects? [Science Experiments for Kids]

"Silicone" doesn't refer to one specific material but rather a group of materials that contain the elements silicon and oxygen. Silicones are polymers, meaning they're molecules made up of long chains of repeated units.

The compounds are used in "all sorts of products, from cosmetics, lotions, shampoos and conditioners, to lubricants and sealants," Sachleben said.

"Silicone oils have unique properties in that they can be liquids that flow freely, or semisolids that flow slowly in the absence of pressure, but act like rubbery solids under stress," Sachleben told Live Science. This characteristic is called "viscoelasticity," he said.

But a substance's degree of viscoelasticity depends on the length of the polymer chains in the silicone oil, Sachleben said.

For example, "Imagine long (very long!) strings of spaghetti," Sachleben wrote in an email. "They stick together, so [they] can hold a shape, but place a ball of them on the counter and, over time, they slowly sink down into a low pile. Longer strings [of spaghetti] hold their shape better than shorter ones."

Similarly, with kinetic sand, the polymer chains within the silicone oil make the sand particles stick together so you can form them into a ball. However, the ball will slowly flatten out over time.

But the silicone-oil-coated sand particles stick only to each other, not to other surfaces, Sachleben noted. This is why kinetic sand doesn't seem "sticky" and is easy to clean up, he said.