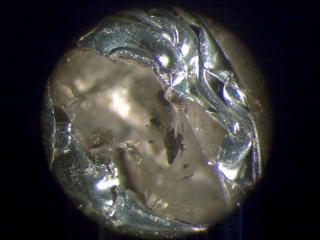 This diamond discovered in Cullinan, South Africa contains the first evidence of a mineral scientists have sought after for years.
(Image: © Courtesy of Nester Korolev, UBC)

A schist in the hand may be quite continental, but diamonds are a geologist's best friend.

For proof, look no further than a recently mined diamond that contained a mineral that had never been seen in nature — until now.

The discovered mineral — called calcium silicate perovskite (CaSiO3)— was found trapped inside a diamond excavated from South Africa's Cullinan mine (most famous for yielding the world's largest diamond in 1905, part of which now adorns the crown jewels of the United Kingdom). The finding, published online today (March 7) in the journal Nature, provides an important clue to the puzzle of how Earth's inner structure behaves. [Shine On: Photos of Dazzling Mineral Specimens]

While rare to human eyes, calcium silicate perovskite may be shockingly ordinary deep inside the Earth — in fact, it's thought to be the fourth most abundant mineral inside the planet, especially prevalent in slabs of oceanic crust that have plunged into the planet's mantle at tectonic boundaries.

Despite the mineral's theorized prevalence, however, previous studies have never yielded observable evidence of its existence. It's thought to occur deep inside Earth's mantle, however — some 700 kilometers (435 miles) below the planet's surface, the researchers said.

In the new study, Pearson and his colleagues analyzed a tiny diamond (roughly 3 millimeters across) excavated from Cullinan less than 1 km (0.6 miles) below the Earth's surface. Despite this relatively shallow depth, the researchers determined that the crystal was an example of a "deep diamond" that most likely had been formed about 700 km below the Earth's surface, derived from a subducted slab of ocean crust and exposed to some 240,000 atmospheres of pressure.

"Diamonds are really unique ways of seeing what's in the Earth," Pearson said. "And the specific composition of the perovskite inclusion in this particular diamond very clearly indicates the recycling of oceanic crust into Earth's lower mantle. It provides fundamental proof of what happens to the fate of oceanic plates as they descend into the depths of the Earth."