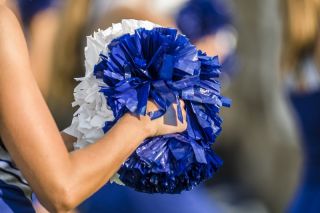 Thousands of cheerleaders who attended a national competition last month recently received some not-so-cheery news: They may have been exposed to mumps.

On Friday (March 2), officials at the Texas Department of State Health Services sent letters to people who attended the competition — called the National Cheerleaders Association (NCA) All-Star National Championship — alerting them that a person contagious with mumps was at the event.

More than 23,000 cheerleaders and 2,600 coaches attended the championship, which took place in Dallas from Feb. 23 to Feb. 25, according to the NCA. The athletes came from 39 U.S. states and nine countries, NCA said.

Officials said that attendees of the competition should be on the lookout for symptoms of mumps for the next few weeks. [27 Devastating Infectious Diseases]

Mumps is a contagious viral disease that causes swelling of the salivary glands, leading to puffy cheeks. It can also cause fever, headache, fatigue and loss of appetite, according to the Centers for Disease Control and Prevention (CDC).

The virus is spread through saliva and respiratory droplets, meaning that people with mumps can infect others by coughing, sneezing or talking, the CDC said. People may also become infected by sharing items such as cups or eating utensils, or by touching surfaces that are contaminated with the virus.

Once people are infected with the virus, symptoms usually take 16 to 18 days to appear, but it may take as long as 25 days to show symptoms, the CDC said. That means that if anyone at the NCA competition last month became infected with mumps, they could develop symptoms up until March 22.

People typically receive two doses of the mumps vaccine (which is part of the measles, mumps and rubella shot) in childhood, and the vaccine is up to 88 percent effective at preventing the disease, according to the CDC.

But even vaccinated people can become infected with mumps, particularly if they are exposed to a relatively high amount of the virus, which could happen during a mumps outbreaks in close-quarter living spaces such as dorms.

"The exposure that they have to mumps is so high in these situations that it overcomes the ability of the vaccine to protect them," Dr. Amesh Adalja, an infectious-disease specialist, told Live Science in a 2016 interview. "It may be that, in these special situations, a much higher level of antibodies [against mumps] is needed to keep the virus at bay," Adalja said.

Attendees of the NCA competition are being told to contact their health care provider if they experience symptoms of mumps. So far, no cases of mumps tied to the competition have been reported, according to The Washington Post.