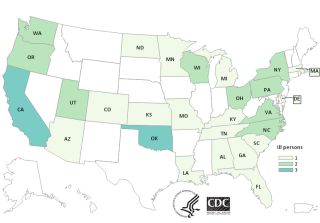 People in 27 states have been sickened in the current Salmonella outbreak linked to kratom.
(Image: © CDC)

A dozen more people have been sickened in a Salmonella outbreak linked to kratom, the Centers for Disease Control and Prevention (CDC) announced today (March 2).

Since the outbreak was first announced on Feb. 20, a total of 40 people in 27 states have been sickened by the herbal supplement, according to the CDC. Of these, 45 percent have been hospitalized, and no deaths have been reported.

The strain of Salmonella found in the outbreak has been linked to leftover kratom powder collected from sick people in North Dakota and Utah, the CDC said. However, the agency has yet to identify a common brand or supplier linked to the tainted product. Individuals interviewed by the CDC have reported purchasing the substance from retail locations as well as online. The outbreak spans the country, with cases reported from Florida to Washington state.

Because the source of the outbreak has not yet been identified, the CDC is recommending that people not consume kratom in any form.

Kratom, also known as Mitragyna speciosa, is a plant that grows in Southeast Asia and is consumed for its stimulant effects and as an opioid substitute, the CDC says. Herbal products containing kratom are gaining popularity in the U.S., despite warnings from the U.S. Food and Drug Administration to avoid them. (On Feb. 6, the FDA reported that the results of an internal study had found that kratom contained opioids.)