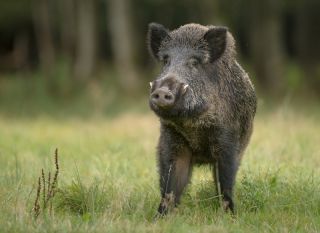 It sounded like a fun party with friends, family and food. But after this particular celebration in Northern California, a dozen guests wound up sick, with fevers, abdominal pain, diarrhea and vomiting, and many ended up in the hospital, according to a new report from the Centers for Disease Control and Prevention (CDC).

The culprit: Trichinosis, a parasitic disease rarely seen in the United States, caused by worms found in meat — particularly pork.

The party featured several pork dishes, including a traditional Laotian dish called larb, in which the pork was served raw, the report said. The meat came from a domesticated wild boar, which was raised and slaughtered on the host's family farm.

Health officials in Alameda County, east of San Francisco, first heard about the outbreak when a doctor in the area notified authorities about a suspected case of trichinosis in a patient who attended the party. [8 Awful Parasite Infections That Will Make Your Skin Crawl]

A public health investigation identified a total of 12 guests who came down with trichinosis after the party. (The party took place on Dec. 28, 2016, and attendees fell ill between the party date and Jan. 23, 2017.)

Nine people needed to be hospitalized, and of those, two required treatment in the intensive care unit (ICU). Complications tied to the illness included sepsis, acute kidney injury and gastrointestinal bleeding, the report said. All of the guests survived the illness, according to the report.

Health officials tested raw pork from the boar served at the party, and found that it tested positive for Trichinella, the roundworm that causes the disease. The boar was reportedly fed commercial feed only, but it's possible that it may have also consumed small animals, such as chicks, that got into the pig's pen and could have been the source of the Trichinella, the report said.

Trichinosis (also called trichinellosis) used to be more common in the United States, with about 360 cases each year in the 1940s and '50s. But thanks to improvements in agricultural and food-processing standards, the disease is now much more rare, with only about 14 cases reported each year from 2006 to 2015, according to the CDC.

Still, the disease remains a risk, particularly among people who consume raw or undercooked wild game meat or pork from noncommercial sources, the report said.

Health officials informed the event host and guests about the risks of consuming raw meat. The event host was told that, to reduce the risk of trichinosis when consuming pigs from his farm, he should freeze raw meat for 30 days and cook meat to a minimum temperature of 160 degrees Fahrenheit (71 degrees Celsius).

The event host said he had served raw pork at previous parties, and no one had gotten sick before. The host said he wouldn't serve raw pork from pigs from his farm in the future, although it wasn't clear if he would avoid raw meat altogether. Several patients told health officials that they would no longer eat raw meat, the report said.

"Cultural practices that involve the consumption of raw meat might place certain groups at a higher risk for infection with Trichinella," the report said. "Public health, agriculture, and wildlife authorities should strengthen efforts to provide culturally competent education about trichinellosis prevention to private farmers, hunters, and communities whose cultural practices include raw meat consumption," the researchers concluded.