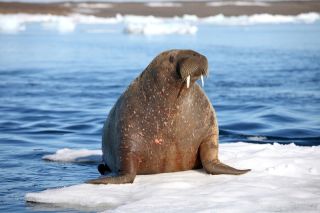 Ten people in Alaska were recently infected with what is now a relatively rare parasitic worm that they got from eating walrus meat, according to a new report.

The cases occurred between July 2016 and May 2017, the report said. All 10 were infected with a parasitic worm called Trichinella, that they likely got from eating undercooked walrus meat. These are the first reported cases of Trichinella infection tied to eating walrus meat in Alaska since 2002, and the first outbreak (involving more than a single infected person) since 1992, the report said.

The worm causes an illness called trichinellosis, and people with it may have a range of symptoms, including nausea, diarrhea, vomiting, fatigue and fever, as well as swelling of the face and eyes, aching joints and muscle pains, according to the Centers for Disease Control and Prevention (CDC). In severe cases, people can die from the disease, although everyone involved in the recent Alaska outbreaks recovered.

Trichinellosis (also called trichinosis) used to be much more common in the United States, with about 400 cases occurring each year in the 1940s, typically in people who ate undercooked pork, the CDC said. But cases have declined significantly over the last half century, and today, there are only about 15 cases per year. Most trichinellosis cases today do not come from pork, but rather from wild game, the report said.

The patients in Alaska lived in a 150-mile coastal area of the state called Norton Sound. Officials became aware of the outbreak when a teenage girl in the region went to the doctor in August 2016 with swelling in her legs, difficulty walking, weakness and a fever. The teen and several other members of her family, including her brother, father, aunt and uncle, were all eventually diagnosed with trichinellosis. All of the patients reported recently consuming raw or undercooked walrus meat. [Top 7 Germs in Food that Make You Sick]

A separate outbreak occurred in May 2017, when doctors identified trichinellosis in five people living in a different Norton Sound community. These cases involved two men who went hunting together, as well as several of their family members, who all ate undercooked walrus meat. In this outbreak, researchers tested samples of frozen meat that were stored in the families' freezers, and found that one sample tested positive for Trichinella.

Freezing pork products that are less than 6 inches thick for 20 days at 5 degrees F (minus 15 degrees C) can kill Trichinella worms. However, freezing wild game is not necessarily effective at killing these worms, because some of the species of worms that infect wild game are freeze-resistant. This includes the Trichinella nativa species that infects walrus, the report said.

The report is published in the July 7 issue of the CDC journal Morbidity and Mortality Weekly Report.