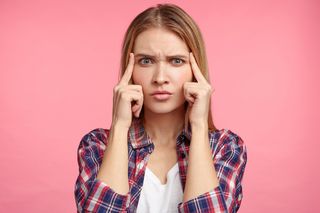 Something as simple as running out to grab a coffee may not be a memorable experience — but anxiety could change that. A new study suggests that people with higher anxiety levels might remember certain events better than people with lower anxiety levels.

That's because, researchers say, higher anxiety may make people more susceptible to negative feelings, putting them in a more negative state of mind. That, in turn, may make certain events seem more memorable.

In other words, a little bit of anxiety could give your memory a boost. [10 Ways to Keep Your Mind Sharp]

Consider this scenario: If a person is having a bad day and then goes to Starbucks, where the barista asks a neutral question, such as "Would you like milk in your coffee?" this may be interpreted as something negative if someone is in a bad frame of mind. Later, an individual may remember this trip for coffee as a negative experience because of this negative mindset, said co-study author Christopher Lee, a doctoral candidate in psychology at the University of Waterloo in Canada.

In the study, the researchers started by giving 80 undergraduate students an anxiety test. They found that the people who scored highly on that test — which measured anxiety experienced in the two weeks prior — were more susceptible to negative feelings than people with lower levels of anxiety. The people in the study didn't have a diagnosed anxiety disorder.

Then, to test memory, the participants were shown a series of neutral words, one at a time, overlaid onto either a photo of a negative scene — meaning something that could affect their emotions, such as a car accident or a cemetery — or a neutral scene, such as a lake or trees. Neutral words included words like "table" or "desk" that don't elicit emotion.

Later, the participants were asked to think back to the words they were shown earlier, which caused them to re-enter either a negative or neutral mindset, said study author Myra Fernandes, a professor of psychology at the University of Waterloo in Canada. The participants were then presented with another set of neutral words, and their memory of these new words was tested.

In other words, when highly anxious individuals took in otherwise emotionally neutral information that was presented to them, it became tinged by their negative mindset, making the information more memorable. But these same effects were not seen in people with low levels of anxiety, the researchers found. [11 Tips to Lower Stress]

It's not entirely clear how anxiety may enhance memory. It could be that for highly anxious people, memories of neutral events seen or neutral information learned while in a negative mindset become more "emotionally tainted," rendering it more memorable, Fernandes told Live Science.

Previous studies have found that extreme levels of anxiety, such as those experienced by people diagnosed with an anxiety disorder, can be quite detrimental to memory and cognitive performance, Fernandes said. But the highly anxious people in this study represent individuals who are managing their anxiety, and it is not debilitating to them, she noted.

What's more, the findings also suggest that it's important to be aware of how biases can occur when people take in and remember information, the researchers said.

One of the limitations of the study is that it looked only at a person's memory of words and not other types of information, such as faces, scenes or color, Fernandes said. So, it's not yet known if the findings would apply to these other aspects of memory, she noted.

Another limitation is that the participants were all college students, typically in their early 20s, and it's not clear whether similar results would be seen in people of other ages.

The study was published in the January issue of the journal Brain Sciences.