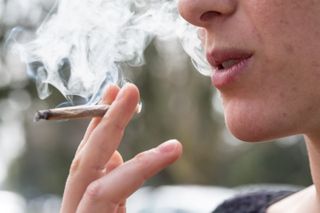 Which came first, the burnout or the weed?

Though various studies have linked teenage cannabis use to noticeable cognitive decline in adulthood, a recent paper published in the journal NeuroImage casts doubt on the existence of this straightforward cause-and-effect relationship.

Among a sample of 28-year-olds who took a working-memory test while undergoing an MRI brain scan, individuals who started smoking marijuana in adolescence performed just as well or even better than individuals who never smoked cannabis, the study found. What's more, the brain regions that worked more slowly in the cannabis-smoking set compared to the nonsmokers were inconsistent from person to person, suggesting that other factors besides marijuana could account for the cognitive difference. [7 Ways Marijuana May Affect The Brain]

"We know that adolescent brains are still changing and developing, and we also know that this is a time when a lot of people are experimenting with cannabis and other drugs," said lead study author Brenden Tervo-Clemmens, a doctoral student in clinical psychology at the University of Pittsburgh. "I'm interested in this cause-and-effect relationship that may or may not exist."

Marijuana and the brain

Tervo-Clemmens and his colleagues recruited 75 participants from the Maternal Health Practices and Child Development (MHPCD) project — a longitudinal study that looks at the effects of prenatal drug exposure on children from low-income families — to take a working-memory test while undergoing a brain scan. All of the participants' substance use experience had been closely monitored for their entire lives, Tervo-Clemmens said.

For the working-memory test, participants were asked to memorize the positions of several yellow circles on a screen (reflected into the MRI using a mirror). The screen went blank, giving participants several seconds to remember the positions, and then new circles appeared. Participants indicated by tapping a finger whether the new circles were in any of the same positions as the initial circles.

Consistent with the results of previous studies, the researchers found that participants who started smoking cannabis at the youngest age had slower reaction times than those who started smoking later, and participants who reported smoking the most cannabis had a lower accuracy on the test than those who reported smoking less. (Given these results, Tervo-Clemmens noted that it is too early to rule out the possibility that cannabis may lead to some cognitive changes in adolescents.) [25 Things You Should Know About Cannabis]

Oddly, though, an individual's age of cannabis onset and total amount smoked did not appear to have any cumulative effect, the research found. It didn't seem to matter how much weed the youngest users smoked, or at what age the highest-dose users started smoking. Indeed, the MRI results also showed that the these two factors corresponded to two different sections of the brain, the researchers said.

"If it was really the case that there was some sort of sensitive period to cannabis in adolescence, you would probably expect that when you started and how much you used would work together," Tervo-Clemmens said. "But we didn't find that."

Another surprise came when comparing the memory test results of smokers and nonsmokers on a group level. Cannabis users performed just as well on the test as the nonsmokers, and in some cases performed "significantly better" in speed and accuracy, the researchers said.

These results suggest that the relationship between adolescent cannabis use and cognitive decline in adulthood might not be as straightforward as previously thought, the researchers said. "We suspect that some of these cognitive factors that look like they're associated with cannabis use in adolescence might actually be predictive factors of risk for substance use initiation," Tervo-Clemmens said. In other words, the causes behind later cognitive decline may come before a person starts using the drug, and not the other way around.

To further test this hypothesis, Tervo-Clemmens and his colleagues are working on a follow-up study, which will compare brain scans of 85 adolescents taken at 12 years old (before any cannabis use) and at 15 years old (after about 30 percent of them started smoking cannabis). "I think we're ruling out a straightforward explanation that adolescent cannabis use is bad for the brain," Tervo-Clemmens said. "But there's a lot more of the story yet to unfold."