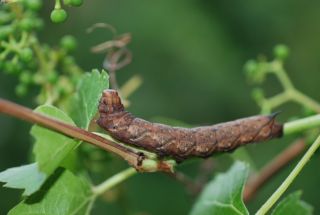 Caterpillars aren't known for being noisy — except, perhaps, for the chomping sounds they make while munching on leaves — but hawkmoth and sphinx moths are far rowdier, producing clicks, whistles and other sounds when attacked by hungry predators.

However, it wasn't immediately clear how some of these voracious insects were making such weird noises — in particular, the Nessus sphinx hawkmoth caterpillar (Amphion floridensis), which emits a faint cry that sounds like a mix between spitting and static.

To investigate, the researchers trapped wild female moths and raised the moths' eggs in the lab, "which was no menial task," because the caterpillars ravenously devoured wild grape leaves from her garden, study senior researcher Jayne Yack, a professor of biology at Carleton University, in Ottawa, Canada, said in a statement.

Once the caterpillars were grown, Yack and study lead researcher Conrado Rosi-Denadai, a biologist at Carleton University, surrounded the caterpillars with microphones and then "attacked" the insects by gently pinching them with forceps.

"We gave them a light pinch right behind their head, and that simulated a bird or a predator attack," Yack told Live Science. The microphones revealed that the sound was loudest at the caterpillars' mouth, which the critters kept open when they emitted noise. This indicated that the noise came from inside the creatures, and verified it wasn't the result of the creature grinding its mandibles (its chewing bits) together, Yack said. It also confirmed that the researchers had to look inside the caterpillar to pinpoint its sound-making structures, she said.

But that wasn't exactly a walk in the park.

"Maybe one day it will be possible to observe what's happening inside a live insect, which is quite small, when something fast is happening," Yack said. "Right now, we don't have the equipment to do that kind of thing."

Instead, study co-researcher Melanie Scallion, who is also a biologist at Carleton University, dissected the caterpillar's throats to look for structures that might be responsible for their scratchy cry. But she found none. So, study co-researcher Craig Merrett, an assistant professor in the Department of Mechanical and Aeronautical Engineering at Clarkson University, in New York, changed course — and began analyzing the sound waves the caterpillar produced and making models to test his ideas.

"He concluded, based on his model, that these frequencies matched the model for turbulent air flow," Yack said. In essence, it's likely that the sound arises when the caterpillar forces air through a constriction between its two foregut chambers (the crop and esophagus), similar to the way a kettle whistles, the researchers said.

As air passes through this constriction, certain sound frequencies are amplified by the esophagus, much like the sound that is produced when a person blows across the mouth of a bottle, the researchers said. [What's That Noise? 11 Strange and Mysterious Sounds on Earth & Beyond]

However, it's not yet clear how the feisty caterpillars draw air into the top portion of their guts, Yack said. Unlike most vertebrates, caterpillars don't have lungs, she noted. Rather, air enters their bodies through openings called spiracles that are on the outside of their bodies.

Until they can further test the finding, the new study "contributes to our general understanding of how the soundscape of insects and animals are important for their survival," Yack said.

The study was published online today (Feb. 26) in the Journal of Experimental Biology.