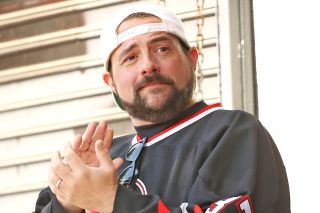 This past weekend, filmmaker Kevin Smith survived a heart attack that's usually so deadly that doctors call it the widow-maker. But what exactly is this type of heart attack, and how did the "Clerks" director beat the odds?

Smith, 47, announced the news on Twitter and Facebook early this morning (Feb. 26), saying that "The doctor who saved my life at the #glendale hospital told me I had 100% blockage of my LAD artery (also known as 'the Widow-Maker' because when it goes, you're a goner)."

There are two main arteries that supply blood to the muscles of the heart, but the LAD — that is, the left anterior descending artery — delivers more blood than the other, called the right coronary artery, Dr. Ameya Kulkarni, a cardiologist at Kaiser Mid-Atlantic Permanente Medical group in McLean, Virginia, told the American Heart Association (AHA) in August 2017. [9 New Ways to Keep Your Heart Healthy]

When the LAD is clogged, the heart muscle can no longer receive oxygen-rich blood, resulting in damage to the tissue. The most common cause of these blockages is atherosclerosis, the buildup of plaque from cholesterol and other substances along the artery's inner lining, according to Johns Hopkins Medicine. The medical term for an LAD blockage is a proximal LAD lesion.

"They call it the widow-maker because it's the most deadly heart attack you can have," Kulkarni told the AHA. (Though the nickname "widow-maker" implies that the condition occurs only in men, women can also have this type of heart attack.)

Not everyone has symptoms before a heart attack, but Smith did, according to his Facebook post. The filmmaker was scheduled to do two stand-up-comedy shows at the Alex Theatre in Glendale, California, on Sunday (Feb. 25), but reported feeling ill halfway through.

"I was trying to do a killer stand-up special this evening, but I might've gone too far," Smith wrote. "After the first show, I felt kinda nauseous. I threw up a little, but it didn't seem to help. Then I started sweating buckets and my chest felt heavy."

Other heart attack symptoms include mild or severe chest pain, which happens when the heart is not receiving enough oxygenated blood, according to Johns Hopkins Medicine. Patients may also feel pain radiating in their arms, shoulders, jaw, neck and back; shortness of breath; and weakness or fatigue.

Receiving immediate medical attention likely increased Smith's chances of survival. The director canceled his second show, and an ambulance took him to the hospital, where "they cut into my groin to slip a stent into the lethal Widow-Maker," he wrote in the Facebook post. A stent is a small tube surgeons can insert into an artery to give it support and keep it open, Live Science reported previously.

Smith noted that his father died from a major heart attack and that this episode was a wake-up call for the director. "I'm sure I'll be facing some lifestyle changes (maybe it's time to go vegan)," he wrote in the Facebook post.