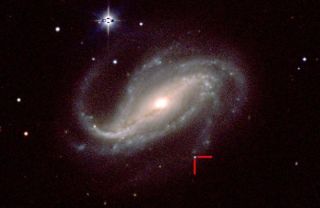 On a September night in Argentina, amateur astronomer Victor Buso took his camera outside, mounted it on a 16-inch telescope and trained it on a spiral galaxy some 80 million light-years from Earth. Buso was just trying to test out his new camera. He didn't expect to win the cosmic lottery — or to prove scientists right about a long-held theory about how supernovas occur.

While photographing the NGC 613 galaxy over the course of about an hour, Buso inadvertently captured several images of a star moving through the first visible stages of a supernova — the explosive (and visibly bright) death of a supermassive star. In one photo, the space below the spiral galaxy looked seemingly empty. In the next, a bright blast of light had appeared.

Such photos of emerging supernovas have never been captured before, and with good reason; according to astronomers at the Instituto de Astrofísica de La Plata in Argentina, the chances of randomly catching a star going supernova are about 1 in 10 million at best. [The Best Space Photos Ever]

Buso quickly shared his photographic findings with astronomers, and, by the next morning, telescopes around the world took aim at the dying star.

"Professional astronomers have long been searching for such an event," Alex Filippenko, an astronomer at the University of California, Berkeley, said in a statement. "Observations of stars in the first moments they begin exploding provide information that cannot be directly obtained in any other way." Filippenko worked on a follow-up study of the star published Wednesday (Feb. 21) in the journal Nature.

Supernovas occur when the universe's most massive stars (roughly eight to 15 times the mass of our sun) either acquire or lose too much matter, causing the star's core to collapse. According to Live Science's sister site Space.com, a supernova happens somewhere in the universe once every second or so. However, it's hard for researchers to detect the stellar explosions until they're well underway.

Scientists determined that the supernova Buso witnessed was a Type IIb supernova, meaning the star's core likely imploded after losing too much hydrogen and helium fuel to another nearby star. Researchers believe the star may have started at close to 20 times the mass of our sun, but could have dwindled to just five solar masses by the time the supernova began, thanks to the companion star's hydrogen siphoning.

Once a star's core collapses, a powerful wave of pressure blasts outward in a violent storm of energy visible across the electromagnetic spectrum. The resulting explosion of energy can last for months, or even years.

Buso's photographs capture the first known images of a supernova "shock breakout," in which that pressure wave from the star's exploding core hits gases at the star's surface, causing them to warm and brighten significantly. According to the researchers, these photos provide the first observable evidence of a supernova behavior that has been theoretical until only now. Initial research on the supernova seems to confirm how scientists theorized such a breakout would occur.

Further study of the star's brilliant death may provide valuable clues to the physical structure of supermassive stars just before their flashy demise.