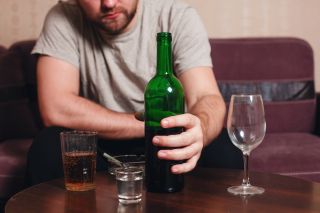 There may be a mean drunk inside every man — and now scientists think they might know why.

According to a new paper published in the February issue of the journal Cognitive, Affective & Behavioral Neuroscience, MRI scans of drunk and sober men show that alcohol-related changes in the prefrontal cortex — the region of the brain thought to be responsible for moderating social behavior and aggression, among other executive functions — may be responsible for booze-induced anger.

In the new study, researchers from the University of New South Wales in Australia recruited 50 healthy men (ages 18 to 30 years old) to play a standard aggression-inducing game while lying in an MRI scanner. While alcohol had been previously shown to disrupt the normal functioning of multiple brain regions (including parts responsible for working memory, hand-eye coordination and sleep quality), MRI evidence linking aggression to alcohol-induced changes in the prefrontal cortex had been lacking until now, the researchers said. [7 Ways Alcohol Affects Your Health]

Volunteers were asked to guzzle either two alcoholic drinks or two nonalcoholic placebo drinks before attempting the aggression game. Each member of the intoxicated set drank two cups of lemony vodka tonic, mixed to raise each drinker's breath alcohol concentration above the legal driving limit in Australia, 0.05 percent.

After downing their drinks, the participants entered the MRI scanner to play a few dozen rounds of the aggression game, which was described to them as a competitive reaction-time task. Each participant was shown a screen and had to race his "opponent" (which was actually a computer AI, but was described to the participants as a real student playing the game remotely from an adjacent room) to press a button whenever he saw a colored square appear on-screen.

"Aggression is thought to occur because alcohol focuses attention on instigatory cues (such as the noise blasts) and away from inhibitory cues (norms proscribing aggression)," the researchers said in the study.

In other words, the researchers believe that alcohol's dampening effects on the prefrontal cortex could make intoxicated players more biased toward hostile cues and less wary of social etiquette, resulting in more aggressive behavior. The reduction in activity in these regions "may reflect reduced self-awareness" in intoxicated people, they added.

While further MRI studies with larger samples of drunk and sober participants are needed, this study gives researchers a clearer picture of where alcohol-induced aggression may come from.

If nothing else, it provides weary bartenders with a more specific refrain to yell at over-the-limit patrons: "Hey, buddy, I think your dorsomedial prefrontal cortex has had enough!"