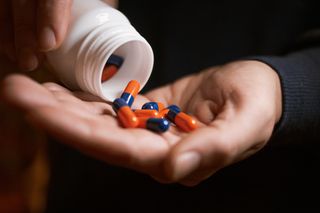 Taking over-the-counter pain relievers might do more than suppress aches and pains: A new review suggests that these medications, including ibuprofen and acetaminophen, could influence people's psychology. But there's no need to panic about so-called mind-altering OTC pain relievers just yet — the researchers stressed that much more research is needed to fully understand these potential effects.

However, the idea that certain OTC medications have psychological effects is not new, according to the review, published yesterday (Feb. 6) in the journal Policy Insights from the Behavioraland Brain Sciences.

"Researchers started looking at these [OTC] pain medication effects on psychology because there have been debates in the literature if brain regions responsive to physical pain are also responsive to social pain," said lead author Kyle Ratner, an assistant professor of psychological and brain sciences at the University of California, Santa Barbara. [10 Things You Didn't Know About the Brain]

"Researchers reasoned that if there is an overlap in physical and social pain, then drugs designed to reduce physical pain should reduce social pain," Ratner told Live Science.

In the review, Ratner and his colleagues looked at 7 studies published between 2010 and 2016, as well as at their own as yet unpublished data. The researchers concluded that there is reason to believe that widely available OTC pain relievers affect people's empathy, sensitivity to emotionally painful experiences and ability to process information.

"On one level, the results are surprising, because so many people take these over-the-counter drugs without thinking that they will have an influence on psychology," Ratner said. "If existing results are confirmed — and I really want to emphasize that more research is needed — we might need to update our view of these drugs."

One study included in the review showed that people's ability to empathize with others might decrease after taking acetaminophen. In that study, published in 2016 the participants were less affected when they read about other people suffering from physical or emotional pain compared to participants who had not taken the medicine.

In another study, acetaminophen seemed to increase the amount of errors participants made when playing a game.

One study found that women who took ibuprofen reported experiencing less-unpleasant feelings from emotionally painful experiences than people who took a placebo. Male participants in the experiment, however, reported the opposite experience.

The exact mechanism of how these types of medications affect a person's mental state is not known, Ratner said. It's possible, for example, that the pain relievers affect some neurotransmitters, he said. The drugs' ability to reduce inflammation may, surprisingly, also have an effect, he added.

"These drugs effects are complex," Ratner said. "There is emerging work looking at the relationship between inflammation and psychology."

Ratner suggested that, in light of some of the findings, doctors could expand the use of OTC pain relievers for psychological treatments. However, it might also be necessary to review the drugs' easily available status, he said.

"It is possible that these drugs could have therapeutic effects beyond how they are typically used," he said. "However, it is important to be aware that if it is determined through further research that there are new therapeutic uses, people have to be mindful of some of the dangers of taking these drugs in too high a dosage."