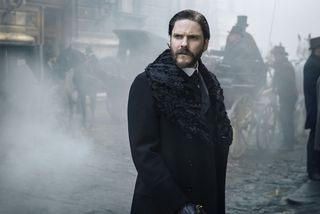 TNT's new dramatic series "The Alienist," which premiered Jan. 22, features a 19th-century psychologist — known at the time as an "alienist" — leading the search for a murderer in New York City in 1896.

Based on the 1994 Caleb Carr novel by the same name, "The Alienist" offers a glimpse of a then-nascent scientific field: psychology. The term "alienist" originated around 1864 from the French word "aliéniste," which was derived from "aliéné," the word for "insane," according to Merriam-Webster.

In the TV series, the alienist Dr. Laszlo Kreizler (Daniel Brühl), described by those who know him as a type of eccentric visionary among physicians, introduces and practices the very unorthodox method of tracking and catching criminals by attempting to understand the way they think, in order to predict their next move. Kreizler applies these practices to the apprehension of an unknown assailant who is murdering boy prostitutes in the tenement neighborhoods of downtown New York City. [Understanding the 10 Most Destructive Human Behaviors]

At the time, psychology — the clinical study of mental pathologies — was in its infancy. The mentally ill were isolated or confined rather than treated, and medical professionals were still decades away from routinely performing behavioral analyses that revealed the inner workings of the criminal mind. So, what, exactly, did experts in the 1800s really know about criminal behavior and thinking?

Psychology, as practiced by alienists in the mid-19th century, bore little resemblance to the clinical or behavioral work of today. The discipline was primarily a laboratory science, in which experts analyzed aspects of learning, perception and memory, Naftali G. Berrill, executive director of The New York Center for Neuropsychology and Forensic Behavioral Science, told Live Science.

"It was closer to what we call cognitive science now," Berrill said. "It certainly was not clinical or behavioral with respect to the notion of forensic psychology or doing psychotherapy."

What Kreizler's character does — attempt to sketch the personality of an unknown criminal by analyzing clues from the crimes he committed — would have been a very radical notion at the time, Berrill said. It wasn't until the early 20th century when psychologists began to consider the influence of the unconscious mind on individual actions, and it was even later, in the wake of World War II, when psychologists really began to investigate the social factors that could lead to aggressive, anti-social and violent behavior, he said.

"In the 1950s and 1960s, there was a big uptick in understanding contextually that poverty might play a large role," Berrill told Live Science. "There was an emphasis in behavioral science to look at the broader landscape. And people started to do more neuropsychological research on the brain itself, to look at what would make an individual behave in a particularly cruel or violent manner."

Experts also came to recognize that brain impairment — and where the impairment lies — could also account for particularly bizarre and violent behavior. For example, Marine veteran Charles Whitman, who murdered 14 people and wounded 30 more in a horrific mass shooting at the University of Texas in 1966, was later found to have a brain tumor pressing on portions of his brain that regulate self-control, which may have contributed to his murderous actions, Berrill told Live Science.

Consideration of all these factors is what allows modern psychologists to figure out what motivates some individuals to perform violently anti-social acts, Berrill said.

And in recent years, brain-scanning technology has enabled scientists to learn even more about the neuroscience of criminal behavior, while a growing body of evidence is helping to further define how environmental circumstances such as deprivation, abuse or trauma can shape physical and mental health.

Brain-imaging methods such as functional magnetic resonance imaging (fMRI) may one day even help to determine a person's innocence or guilt in court, with research showing that changes in brain activity could indicate — with accuracy of up to 90 percent — whether a person was lying or telling the truth, Live Science previously reported.

However, such techniques were unimaginable for those who sought to decipher the mysteries of the mind in 1896. And Kreizler himself admits in the TV series that he is not entirely sure where his tenuous analysis of a criminal's thoughts and motivations will take him, or whether he will emerge from the experience unscathed. "I must follow this wherever it goes, even if it leads me to the darkest pit of hell," he said in Episode 1.