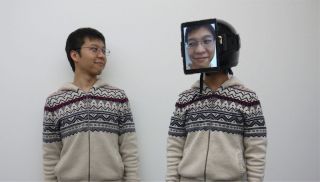 The ChameleonMask would allow you hire a stranger to wear your face.
(Image: © Courtesy of Rekimoto Lab)

Wouldn't you love to lead a full, rich social life without the hassle of getting out of bed in the morning? Soon, you may be able to, thanks to a new prototype of a product called the ChameleonMask, which debuted earlier this week at the MIT Technology Review's EmTech conference in Singapore, NYMag.com reported.

Touted by creator Jun Rekimoto, deputy director of Sony Computer Science Laboratories, Inc., as a "human Uber," the service would essentially allow customers to hire a living, breathing human to walk through the world in his or her stead.

"To do this," Rekimoto wrote on his website, "a surrogate user wears a mask-shaped display that shows a remote user's live face, and a voice channel transmits a remote user's voice." While the remote user looks through a video-enabled tablet attached to the front of the surrogate's mask, the surrogate sees the same view through a concealed mobile phone inside the mask. The surrogate's screen also displays any text instructions that the remote user might type in from home. [5 Intriguing Uses for Artificial Intelligence (That Aren't Killer Robots)]

Simply put: It's like Skype, but with a paid stranger wearing your face over his face!

Similar telepresence devices have existed for more than a decade, primarily in the form of roving robots that can be controlled by remote users. Such robo-surrogates have been used to attend meetings, conduct surgery and even help active-duty military members meet their newborn children from afar.

The ChameleonMask, however, is the first device to ditch the droids in favor of a good, old-fashioned Homo sapiens laborer, according to Rekimoto.

"This design is based on our hypothesis assuming physical and social telepresence can be embodied by such a surrogate human who imitates the remote user," Rekimoto wrote. "It also eliminates many difficulties of teleoperated robots wandering in the environment. Our pilot study confirmed that people could regard the masked person as [the remote operating] person."

In one pilot test, Rekimoto and his colleagues sent a ChameleonMask-wearing surrogate to a government office to obtain a document on a remote user's behalf. It's unclear from footage whether the document-fetching mission was a success, but the (mildly confused) office clerk readily addressed the face he saw on the screen, rather than the surrogate.

ChameleonMask does not have an official launch date as of yet. Until it does, you'll just have to continue canceling all your social obligations like a normal person.