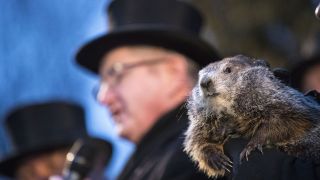 Punxsutawney Phil, the seemingly immortal and consistently cute groundhog and not-so-accurate weather prognosticator, has emerged from his burrow on Gobbler's Knob in Punxsutawney, Pennsylvania, this morning (Feb. 2). And according to the men in the Punxsutawney Groundhog Club, he did not see his shadow.

No shadow indicates that the club thinks the U.S. is in for an early spring. And this year, the chubby groundhog has weather-science on his side, as meteorologists say an early spring is likely.

"For most of the country, there really has not been much of a winter," said AccuWeather Senior Meteorologist Dave Samuhel, as reported by Accuweather. "In fact, we had one of the warmest Januarys in history across the country."

Phil's handlers and the cheering crowds this morning welcomed the furry, well-fed groundhog — also called a woodchuck, marmot and whistle-pig — with flashing cameras and loud cheering in front of Gobbler's Knob. [Here's What Groundhogs Will Do If Winter Goes Long]

This is Phil's 134th so-called weather forecast. And while your average groundhog (Marmota monax) in captivity lives about 10 years, the marmot's caregivers maintain there has been only one furry forecaster.

Another claim of Phil's handlers: that the well-pampered (he lives next to the children's library the other 364 days of the year) rodent is spot-on with his forecasts every year.

"He sees his shadow about 80 percent of the time and the other 20 percent he doesn't," Deeley told Live Science previously. "He's pretty darn accurate."

The various incarnations of Punxsutawney Phil have seen their shadow 103 times (more winter) and reported no shadow, or early springs, 20 times (including this year). And in 1942, apparently, Phil saw a partial shadow, which was counted as "no shadow," according to Stormfax Almanac. There is no record for nine years. Overall, Phil has swung it out of the park about 39 percent of the time, according to Stormfax Almanac.

This year, Accuweather meteorologists predict warmer-than-normal temperatures throughout February across much of the United States. "We are now expecting February temperatures to be above normal across most of the country during the month. Only the northern Plains and Rockies will likely be below normal," Samuhel said.

As for the weather-forecasting powers of woodchucks, those seem to date back to medieval Europe during the early days of Christianity, when clear skies on Candlemas Day (Feb. 2) were said to herald cold weather ahead. This tradition morphed into a myth held by Germans that if the sun came out on Candlemas, a hedgehog would cast its shadow. That would then suggest snow through May.

However, when German immigrants settled in Pennsylvania, the hedgehog forecaster became a groundhog meteorologist.