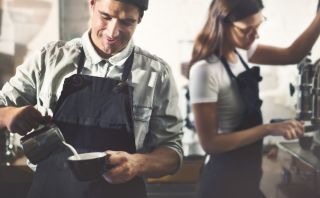 If a lawsuit in California is successful, cafes and shops in the state that sell coffee will have to post health warnings about the beverage.
(Image: © Shutterstock)

Update (March 30, 2018): A California judge ruled on March 29 that coffee shops in the state must include a cancer warning label each cup of joe. Here's more about the ruling and the possible coffee-cancer link.

If a lawsuit in California is successful, Golden State stores that sell coffee will have to warn customers that drinking a cup of joe may be a cancer risk, according to news reports.

But coffee companies argue that although coffee does contain a possible carcinogen — a chemical called acrylamide — it isn't present in the drink in levels that are high enough to increase the risk of cancer in people.

So, what does the science say? Can the acrylamide lurking in coffee increase a person's odds of developing cancer? [10 Things You Need to Know About Coffee]

Although the lawsuit focuses on coffee, acrylamide is present in several types of cooked foods, as well as cigarette smoke. The chemical forms when foods, usually starchy ones — including coffee beans, french fries, potato chips, canned black olives, breakfast cereals and toast — are heated to high temperatures, Marji McCullough, strategic director of nutritional epidemiology at the American Cancer Society, told Live Science previously. McCullough is not involved in the California lawsuit, which was filed in 2010. A private mediation with some of the defendants is set for Feb. 8, CNN reported.

Acrylamide is also used in certain industries to make polyacrylamide and acrylamide copolymers — substances that are used in the production of paper, dyes and plastics. These acrylamide substances are also used to treat drinking water and wastewater, including sewage, according to the National Cancer Institute (NCI).

Despite acrylamide's industrial uses, the primary ways people are exposed to the chemical are through cigarette smoke and food, the NCI says. People can reduce the amount of acrylamide in their diet by not heavily crisping or browning starchy foods, according to studies published in 2004 and 2008. Quitting smoking can also help, as people who smoke have three to five times the amount of acrylamide exposure markers in their blood than nonsmokers do, according to a 2009 review in the journal Nutrition and Cancer.

Once it's in the body, acrylamide is converted into glycidamide, a compound that can cause mutations and damage in DNA, according to the NCI. But although acrylamide exposure is known to increase the risk of cancer in rodents, the evidence is less clear for humans, the NCI says.

Some studies suggest that acrylamide could increase cancer risk in humans, but others find that it doesn't have an effect. It's possible that researchers get mixed results in humans because it's challenging to determine how much acrylamide is in people's diets, the NCI says. Moreover, humans and rodents absorb and metabolize acrylamide at different rates, which may explain the disparate results between rodents and humans.

However, because of its link to cancer in rodents, acrylamide is listed as a possible carcinogen by the International Agency for Research on Cancer (IARC), an agency that's part of the World Health Organization. Because of this listing, a California nonprofit group called the Council for Education and Research on Toxics has sued several companies that make or sell coffee, including Starbucks, 7-Eleven and BP, according to CNN.

The lawsuit says that to be in accordance with the California Safe Drinking Water and Toxic Enforcement Act of 1986, the defendants must provide a "clear and reasonable warning" about the possible risks of drinking coffee. So far, at least 13 of them — including 7-Eleven — have agreed to post a note of caution, CNN reported. [The 10 Deadliest Cancers and Why There's No Cure]

Meanwhile, coffee itself is not listed as a carcinogen by the IARC or the National Toxicology Program. And drinking coffee may actually help decrease the risk of certain cancers. For instance, drinking coffee is linked to a decreased risk of liver cancer, endometrial cancer, colon cancer and one type of skin cancer, Live Science previously reported. Imbibing the beverage has also been linked to a longer life.

However, downing coffee when it's piping hot is a bad idea, as drinking scalding beverages has been linked to esophageal cancer, the IARC says.