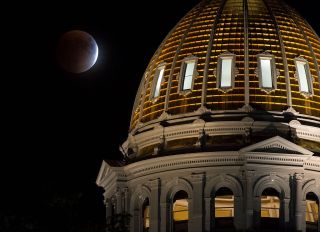 A perigee full moon, or supermoon, is seen during a total lunar eclipse behind The Colorado State Capitol building on September 27, 2015, in Denver, Colorado.
(Image: © NASA/Bill Ingalls)

A lunar eclipse on Wednesday comes equipped with all sorts of superlatives — and most of North America will get to see at least some of the event.

The "Super Blue Blood Moon" eclipse will occur in the wee hours of the morning on Wednesday, Jan. 31, when the full moon will pass through the Earth's shadow. Viewers on Earth will see the face of the moon turn a murky red.

On the West Coast, totality (the full shading of the moon) will occur at 4:51 a.m. PST until 6:08 a.m. PST. Before that, the moon will enter the outer portion of the Earth's shadow, or penumbra, at 2:51 a.m. PST. The real show will become visible starting at 3:48 a.m. PST, when the moon will be entering the umbra, or central portion of Earth's shadow, and a dark shadow will move over the face of the moon. The moon will leave the umbra at 7:11 a.m. PST. [Super Blue Blood Moon 2018: When, Where and How to See It]

East Coasters can catch the partial lunar eclipse before dawn, but they will miss totality because the moon will have set below the horizon by 7:06 a.m. EST. To see the shadow of the Earth become visible on the moon's face, look up at 6:31 a.m. EST; by 6:48 a.m. EST, the moon will be entering the umbra, or central portion of the shadow, which should make the color change more apparent.

For viewers in the Central and Mountain time zones, the moon will set either during the total eclipse or while the satellite is exiting the Earth's shadow. The moon enters the dark umbra at about 5:48 a.m. CST and will hit totality slightly before moonset, at 6:51 a.m. CST. [Stop the Lunacy! 5 Mad Myths About the Moon]

So why all the extra jargon in front of "lunar eclipse?" Well, "blood moon" simply refers to the brick-red color that the moon turns during a lunar eclipse. That color comes from the light from the sun leaking out around the Earth's disk; essentially, the moon is bathed in the light from Earth's sunrises and sunsets.

The "blue" descriptor doesn't refer to anything skywatchers can actually see; a blue moon is the second of two full moons that occur in the same month. January 2018 first saw a full moon on Jan. 1 or Jan. 2, depending on location.

And as for "super," a supermoon occurs when a full moon happens to hit when the moon reaches perigee, the closest point in the natural satellite's orbit to Earth. The difference between perigee and apogee, the farthest point, is around 26,200 miles, or 42,165 kilometers. This translates to a very small difference in brightness and apparent size.