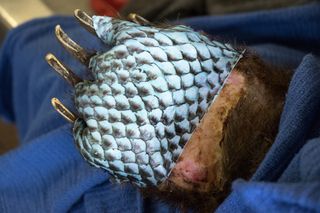 Tilapia skin is full of collagen, which is thought to help burnt skin recover. Notice that the fish-scale pattern is still visible on the bear's bandaged paw.
(Image: © California Department of Fish and Wildlife)

A fishy treatment has helped heal two black bears and a mountain lion whose paws were badly scorched in the deadly Thomas Fire, according to the California Department of Fish and Wildlife (CDFW).

This past December, the CDFW trapped the three wild animals and treated their burnt paws with a homemade burn salve. Then, veterinarians sutured on an experimental bandage — sterilized tilapia skin — to cover the salve and help the animals' paws heal, the CDFW reported.

The treatment worked so well, in fact, that wildlife officials released the two adult black bears (Ursus americanus) and mountain lion (Puma concolor) back into the wild last Thursday (Jan. 18), the CDFW said. [Cuddly But Powerful: See Photos of the World's Bears]

"We're really hopeful that these novel treatments accelerated the healing for these bears and provided them the best odds of survival," Dr. Deana Clifford, a senior wildlife veterinarian with the CDFW, said in a statement.

The Thomas Fire lasted more than a month, from Dec. 4, 2017 to Jan. 12, 2018, and burned 440 square miles (1,140 square kilometers), making it California's largest wildfire in modern history, according to Cal Fire. The fire was so bad that the CDFW was on the lookout for wild animals that might have been injured in the blaze.

The first such animal they spotted — an adult female black bear weighing about 200 lbs. (90 kilograms) — gave Dr. Jamie Peyton, chief of integrative medicine at the University of California, Davis' Veterinary Medical Teaching Hospital, a chance to try out the experimental treatment.

Peyton isn't the first to use tilapia skin on burn victims — doctors in Brazil use the treatment on human burn patients — but she's certainly the first doctor to try it on a veterinary patient, the CDFW said. Peyton said she used the bandages because fish skin is high in collagen, a structural protein found in skin.

Tilapia bandages aren't approved by the U.S. Food and Drug Administration for use on human burn victims. But a 2011 study, published in the Journal of Cutaneous and Aesthetic Surgery, showed that collagen dressings had some benefits, even though there was no significant difference in wound healing between 120 burn patients given either a collagen dressing or a conventional dressing.

"Collagen dressing, however, may avoid the need of skin grafting, and provides [the] additional advantage of patients' compliance and comfort," the researchers wrote in the study.

In the bear's case, Peyton cut pieces of the tilapia skin to fit the bear's paws and sutured them over the bear's wounds while it was under anesthesia. However, because fish are part of bears' diets, she covered the tilapia skin with rice paper and corn husks to make it challenging for the bear to tear off and eat the bandages.

"We expected the outer wrapping to eventually come off, but we hoped the tilapia would keep steady pressure on the wounds and serve as an artificial skin long enough to speed healing of the wounds underneath," Peyton said. She also gave the bear an acupuncture treatment to help it bear the pain.

Within weeks of capturing the first bear, the CDFW brought in two more animals with burnt paws: a pregnant black bear and a mountain lion. These newcomers also got the salve and tilapia treatment. [Amazing Ecology: Award-Winning Photos of Wildlife]

"This treatment has the potential to be used successfully on all kind[s] of burn patients, both domestic and wild," Clifford said. "By better understanding what resources are needed to care for injured wildlife and what treatment techniques increase healing speed, we can make the most informed treatment decisions, reduce animals' time in captivity and provide guidance to other facilities caring for burned animals."

The CDFW also acted as the bears' real estate agents: Given that bears hibernate in the winter, and that these bears hadn't had time to make dens, the officials made dens for them by finding prime real estate — that is, a location by their old habitat that was near food and water but that hadn't been burned by the fire. Then, the wildlife officials dug into the ground and moved logs to make a cozy winter lodge for each bear.

Finally, it was time to say goodbye. The officials sedated each bear and put them in the dens. But they'll be keeping an eye on each one as the bears are fitted with satellite collars and each den has a trail camera by it, the CDFW said.