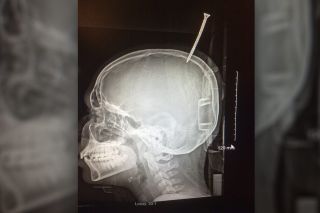 In a life-threatening accident, a Maryland teenager fell while building a tree house and wound up with a 6-inch screw lodged in his skull, according to news reports.

The boy, 13-year-old Darius Foreman, fell down and knocked over a wooden board, which then came crashing down on his head, according to CNN. An X-ray showed that a screw had become lodged between the two halves of his brain, CNN reported.

The main concern with a "foreign body" injury like this is that the object (in this case, a screw) could have damaged a brain area called the superior sagittal sinus, said Dr. Justin Thomas, a neurosurgeon at Southside Hospital in Bay Shore, New York, who was not involved in the boy's case. This area is one of the main vein channels that drains blood from the brain, and damage to it could "result in massive hemorrhage," Thomas told Live Science. [12 Amazing Images in Medicine]

Surviving an injury like this depends on the degree to which the superior sagittal sinus is damaged, and the amount of bleeding, Thomas told Live Science. In Darius' case, the screw came close, but did not tear into the sinus, according to CNN.

The boy "was a millimeter away from having himself bleed to death," Dr. Alan Cohen, the neurosurgeon who operated on Darius at the Johns Hopkins Hospital, told CNN.

However, there's still a risk of bleeding when surgeons try to remove the object, Thomas said. But with careful surgical techniques, an object in this area can be removed, he said.

Thomas noted that the object needs to be removed under controlled circumstances, and that's why first responders could not simply pull the screw out before transporting Darius to the hospital.

But even getting Darius to the hospital proved challenging, because there was a 5-foot wooden board attached to the screw, which was too big to fit in the ambulance, CNN reported. A fire rescue crew had to use the family's saw to cut the board down to 2 feet, CNN said.

Surgeons successfully removed the screw from Darius' skull on Sunday (Jan. 21), and the teen was released from the hospital yesterday (Jan. 25). He was allowed to keep the screw as a memento of his close call, CNN said.