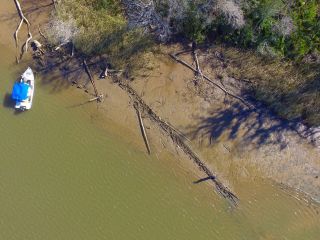 This bird's-eye view shows the current state of the possible slave ship, which is 124 feet (38 meters) long.
(Image: © Ben Raines/BRaines@al.com)

More than 150 years ago, a wealthy man made a heinous bet, boasting he could sneak a ship filled with African slaves into the United States, even though it was illegal to import slaves into the country at that time. After some stealthy maneuvering, the man won the bet and later burned the ship to hide the evidence.

The location of the vessel called the Clotilda — the last ship known to carry slaves into the United States — has long evaded historians. But just recently, Ben Raines, a reporter at the Alabama news site AL.com,discovered a burnt, 19th-century wreck near Mobile, Alabama, that has archaeologists wondering whether the Clotilda's remains have finally been located.

The design of the charred wreckage matches that of a ship built between 1850 and 1880, and the location of the boat is spot-on, maritime experts told Live Science. [See photos of the burned slave ship's remains]

However, the identity of the newfound wreck remains unknown, at least for now. Archaeologists still need to secure permits so they can excavate and study parts of the ship and the artifacts within it; this will likely help the researchers determine whether the ship is, in fact, the Clotilda.

"We weren't expecting to find the bell with the ship's name on it sticking out of the mud," John Bratten, the chair and associate professor of anthropology at the University of West Florida, in Pensacola, told Live Science. Instead, archaeologists will study the ship's hull, which survived the fire because it was beneath the waterline. Experts will also examine "how the ship was fastened together," Bratten said.

Raines found the wreck thanks to dedicated sleuthing, as well as extremely low tides from the weather system that caused the "bomb cyclone" in early January. Upon finding the burnt wreck, Raines immediately roped in local archaeologists, including Bratten, to assess the remains.

"All concluded that the wreck dated to the mid 1800s (the Clotilda was built in 1855), and featured construction techniques typical of Gulf Coast schooners used to haul lumber and other heavy cargo, as the Clotilda was designed to do," Raines reported on AL.com. "The vessel also bore telltale signs of being burned, as the Clotilda reportedly was. … Evidence of a fire on the wreck included a distinctive patina on wrought-iron chain plates used to hold the masts and bowsprit in place, and charred beams and timbers in the ship's interior."

Bratten visited the site with Gregory Cook, an assistant professor of maritime archaeology at the University of West Florida. They not only looked at what the ship was equipped with, but what it lacked, they told Live Science.

"It was fastened together with very large iron bolts, which wasn't surprising at all for this time period," Bratten said. The wreck also sported large iron straps, called chain plates, that would have secured the shrouds, lines and cables to the ship. "Those were apparent to the bow area, which added to the idea that the type of ship was a schooner," Bratten said.

The experts also checked whether the vessel had post-Civil War features, including screws tightened with nuts, machinery systems or an engine — details that would have placed the ship's construction after the Clotilda was built. But the wreck didn't have any of those features, Bratten said. [Mayday! 17 Mysterious Shipwrecks You Can See on Google Earth]

In 1808, Thomas Jefferson signed into law an act prohibiting the import of slaves into the country and any of its territories. But because the demand for slaves was high — largely because of the invention of the cotton gin, which helped workers quickly separate cotton fibers from the plants' seeds — people still illegally brought slaves into the country.

One of those people was Alabama steamboat captain and plantation owner Timothy Meaher. He made a $100,000 bet that he could elude federal troops and sneak slaves into country, and he asked William Foster to captain the vessel, Bratten said. Foster agreed, and, in 1860, he sailed the ship to the Kingdom of Dahomey, now modern-day Benin, to acquire 110 slaves.

But U.S. authorities soon learned of the scheme, prompting Meaher and Foster to hatch another plan: After they got the slaves into the country, they would burn the Clotilda, Raines wrote in AL.com.

According to Sylviane Diouf, a historian who wrote "Dreams of Africa in Alabama" (Oxford University Press, 2007), "[Foster] knew — and Meaher did too — that they might have been spotted, so they had decided to destroy the evidence, the telling signs of a slaving voyage: the partitions, the platforms, the empty casks of food and water, the big pots, the tubs, the blood, the vomit, the spit, the mucus, the urine, and the feces that soiled the planks, the awful smell that always floated around slave ships," Raines wrote in AL.com.

Foster and Meaher were never convicted for their wrongdoing, mostly because the onset of the Civil War meant prosecuting their crime wasn't a priority, Raines wrote. However, Meaher was temporarily arrested, and Foster had to pay a $1,000 fine for failing to register an international trip with the port, Raines said.

The slaves were dispersed among three plantations, but the captives were freed five years later, at the end of the Civil War, Raines wrote. The former slaves asked Meaher to pay for their return passage to Africa, but he refused. So, the group established "Africatown," a community north of Mobile where they could speak their native language, implement traditional African farming techniques and run their own school, Raines wrote.

Some of the slaves' descendants still live there today, and the archaeologists hope to involve those descendants in the ship's excavation, Bratten said. It's possible that future excavations will uncover some of the equipment — such as shackles and chains — the captors used to imprison the slaves, he said.

"It will be a large team project once this gets moving," Bratten said. "It sure is compelling and has potential to be a very important site."