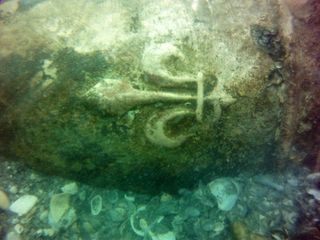 The French fleur-de-lis symbol engraved on a 16th-century bronze cannon discovered in a shipwreck off the coast of Cape Canaveral, in Florida.
(Image: © Global Marine Exploration, Inc.)

A Florida court is hearing arguments about who has the right to recover artifacts from the remains of a 16th-century shipwreck lying on the seafloor near Cape Canaveral.

The long-lost ship's debris include a bounty of artifacts, including three ornate brass cannons and a distinctive marble monument marked with the coat of arms of the King of France, which may be among the earliest traces of European settlement ever found in the Americas.

The descriptions of the artifacts match similar items carried by the 1562 French expedition to Florida commanded by the navigator Jean Ribault (1520-1565), according to historical French records that include the cargo manifests of the ships. [Photos: Colonial-Age Shipwrecks Found Off Cape Canaveral Coast]

The marine salvage firm Global Marine Exploration (GME), which was granted permits by the state of Florida to explore seven areas off the coast of Cape Canaveral, found the artifacts buried in the sandy seafloor in May and June 2016.

GME Chairman and CEO Robert Pritchett announced the finds in July 2016. He expressed hope that his company would be granted a permit to recover the artifacts, which are worth a pretty penny; the brass cannons alone could be worth more than $1 million each, Pritchett told Live Science.

But GME's discovery soon ran into trouble: the nation of France announced in November 2016 that it was claiming ownership of the cannons, monument and other artifacts under an internationally agreed "sovereign right" that prohibits the salvage of naval vessels without permission.

The state of Florida is supporting France in its claim for ownership, and also alleges that GME breached the terms of its exploration permits — an allegation that GME denies.

Sovereign rights over sunken naval vessels are part of U.S. federal law under the Sunken Military Craft Act of 2004. France is using this act to pursue its claim of ownership in the admiralty division of the U.S. District Court in Orlando. (Admiralty courts deal with maritime matters.)

France and Florida claim that the artifacts were being carried on one of the "lost fleet" of French ships commanded by Ribault in September 1565, three years after his own arrival in Florida, as he attempted to transport French soldiers to attack the new Spanish colony at St. Augustine.

Those ships, which included Ribault’s flagship La Trinité, were lost in a storm before they could arrive at St. Augustine. Their wrecks have never been located.

France and Florida allege that if the artifacts were being carried on Ribault’s ships when they sank, as their investigations suggest, then they still belong to the nation of France.

"BAR [Bureau of Archaeological Research] archaeologists conducted a non-invasive site assessment to verify reports from GME, and to further document the condition of the site and identify any additional material immediately visible in the area," Meredith Beatrice, a spokeswoman for Florida's Department of State, told Live Science in an email.

"BAR's assessment indicates that the material located by GME is consistent with material associated with the lost French Fleet of 1565," Beatrice said. "We are working with the French government to ensure that the site is treated in accordance with the federal Sunken Military Craft Act."

But GME counters that the ship that sank off Cape Canaveral while carrying the cannons and monument could not have been one of Ribault's ships, or any French ship.

Pritchett said that historical documents show that the cannons and monument may have been seized as plunder by the Spanish in 1565, during a raid on the French colony of Fort Caroline. If this true, the cannons were probably being carried to Cuba on Spanish ships when they were lost, he said.

If the ship the artifacts were on when it sank was not French, then France has no sovereign right to their ownership, he said.

"France has no case, no evidence [and] no proof in their statements and paperwork to the court — just speculation and smoke," Pritchett said.

And the case has another twist. Pritchett said France cannot prove that the cannons came from a French ship because the hull of the vessel rotted away long ago, leaving only a "scatter field" of debris spread across the seafloor.

"We have explained this over and over, that we have scatter from a possible Spanish ship with some French cannon[s] that were captured by Spain, most likely," he said. "But right now, it is an unidentifiable colonial-period shipwreck scatter."

Pritchett said both parties are currently preparing depositions of their arguments and evidence for the court. He expects hearings before a judge to begin in 2018.

The dispute is emblematic of a "culture of adversarialism" between marine archaeologists and private salvage companies, such as GME, which archaeologists perceive as "treasure hunters," said James Sinclair, a consulting archaeologist for GME who was diving with Pritchett when the cannons and monument were found.

"Classically, treasure hunters are supposed to be snatch-and-grab type of people, and they're only interested in shiny stuff — but that's not the case anymore," Sinclair told Live Science. "People who actually want to do this from the private sector have to come up to a pretty rigid set of rules, regulations and specifications to do the work that they want to do."

Even so, the judge in the case will probably rule that the sunken artifacts came from a French ship, likely Ribault's flagship La Trinité, said Chuck Meide, an underwater and maritime archaeologist who heads the Lighthouse Archaeological Maritime Program (LAMP) at Florida's St. Augustine Lighthouse and Museum.

LAMP and the St. Augustine Lighthouse and Museum are funded, in part, by grants from the state of Florida, but Meide is not involved in the case involving France, Florida and GME.

"In my opinion, it certainly looks like it is the La Trinité," Meide told Live Science. "It's hard to know these things, but I'm cautiously optimistic that, when presented with the evidence, the judge will agree that this is one of those French ships, and probably the Trinité," he said.