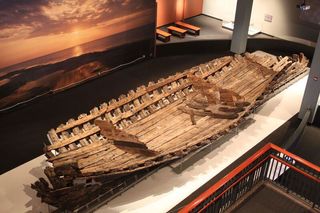 After spending more than 300 years on the bottom of the Gulf of Mexico, the 17th-century French ship that went by the name La Belle, or "The Beautiful," has finally found a new resting place at a museum in Texas.

Archaeologists discovered the shipwreck in 1995, but it took them 17 years to excavate and restore the ship, they said in a statement. Upon finding the wreck, the researchers were able to identify it as La Belle, a French-made ship that sank off the coast of Matagorda Bay (an area about 110 miles, or 177 kilometers, southwest of Houston) in 1686.

"It's been exciting, a huge headache and a huge frustration at times, but I love old ships and in particular this one,” Peter Fix, a watercraft conservator at the Conservation Research Laboratory at Texas A&M University, said in the statement. "Needless to say, it's been a challenging, emotional ride." [Shipwrecks Gallery: Secrets of the Deep]

La Belle, now housed at the Bullock State History Museum in Austin, is one of the most important shipwrecks ever uncovered in North America, Fix said.

The ship was one of four under the command of René-Robert Cavelier, Sieur de La Salle (1643-1687), a famous French pioneer who explored the Great Lakes, the Mississippi River and the Gulf of Mexico. The ships carried La Salle and 300 settlers who planned to colonize the Gulf Coast, expanding France's influence in the New World.

The ships left France on Aug. 1, 1684, but all four ran into trouble. Within two years, all four ships — Le Joly, L’Aimable, St. Francois and La Belle — returned to France, sank or were captured by pirates, Fix said.

La Belle was constructed in France in 1684, and originally measured 54 feet long by 14 feet wide (16 by 4.3 meters). It was designed with a shallow hull so that it could navigate coastal and river waters, including the Mississippi River, Fix said.

However, La Belle never made it to the Mississippi. Poorly drawn maps led the French explorers astray, Fix said. The small fleet missed the Mississippi River delta, and instead landed more than 400 miles (644 km) away, on the Texas coast.

Two storms within days of each other first grounded and later sank La Belle in Matagorda Bay in the winter of 1686, just two years after its construction.

There were 27 people onboard when the ship sank, but only six survived and returned to Fort St. Louis, a nearby French settlement, Fix said.

Within months, mutineers killed La Salle near present-day Navasota, Texas, during a trek to Canada, where the explorer was hoping to gather a rescue mission for his colony. Although La Salle's mission failed, it eventually helped pave the way for Texas' creation — that is, without French influence.

"With the ship went a famous explorer's dreams and a king’s ambition to expand his empire to the New World," the Texas Historical Commission said.

Despite spending more than three centuries underwater, La Belle was chock-full of artifacts from 17th–century France, largely because "La Salle used the ship as a sort of floating warehouse," Fix said.

"When excavated, the archaeological site was found full of merchandise — everything requisite to form a colony and establish trade; knives, ax heads, pottery, tiny glass beads, bottles and brass pins — there are hundreds, or in some cases, thousands, of samples," Fix said. "Personal items including clothing, combs and even a signet ring were found, and also weaponry such as long guns, lead shot, sword parts and three bronze cannons, which were extraordinarily well preserved." [Disasters at Sea: 6 Deadliest Shipwrecks]

After finding the shipwreck, the Texas Historical Commission decided to build a temporary dam around the sunken ship. This allowed archaeologists to pump out the water around the ship, and excavate it in the mud, instead.

Excavations lasted from September 1996 until April 1997. During that time, archaeologists recovered about 1.6 million items from the La Belle wreck, which gave them insights into how the French explorers planned to set up the colony.

La Belle itself is undoubtedly the largest, and most valuable artifact, Fix said. A team, composed largely of Texas A&M nautical archaeology graduate students, meticulously preserved and reconstructed the ship.

"The reason the project took as long as it did was due to the nature of the material and artifact that had to be stabilized," Fix said.

"La Belle’s timbers had become waterlogged and heavily degraded during the 300-year immersion in Matagorda Bay, some even had the consistencies of a wet sponge, and we had to employ methods that would slowly displace the water and strengthen the wood."

For instance, the archaeologists decided to "freeze-dry" each timber, then remove any remaining water. "Had we not used this method, the timbers most likely would have shrunk and distorted so much, they could not have been used to reassemble the ship," Fix said.

Three state agencies worked together to restore and bring the boat to the museum. The boat and its artifacts actually belong to France, according to an international treaty, but the exhibit will stay in Texas indefinitely, under the stewardship of the Texas Historical Commission, Fix said.