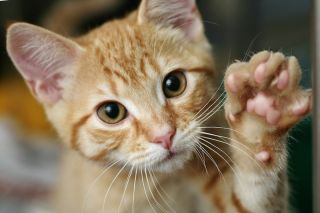 When your cat knocks your favorite coffee mug off the counter, does it use its left paw or its right?

There's no need to sacrifice any drink-ware for the answer; your cat's gender should tell you enough. According to a small feline-behavior study published in the journal Animal Behaviour, female cats are significantly more likely to be right-paw-dominant, while male cats typically favor their left paws. And while this bit of purr-snickety trivia might seem insignificant, your cat's dominant paw may be an indicator of the animal's well-being, said study author Deborah Wells, a reader at Queen's University Belfast's School of Psychology.

For starters: Yes, cats can (and often do) have a dominant paw preference. When animals favor one side of their body over another, it's known as laterality, Wells and her colleagues wrote. Laterality also exists in amphibians, rodents, primates, marsupials and even whales. [10 Weird Cat Behaviors Explained]

In this study, Wells and her colleagues studied paw-preference data from 44 cats (24 male and 20 female) of varying breeds, gathered over three months by the cats' owners. Unlike in previous feline paw-dominance studies conducted in lab settings, participating cats were monitored throughout the course of their daily home lives to see which paw they naturally led with during several routine behaviors.

Researchers were most interested in which paw each cat led with when walking down stairs and stepping over the raised edges of their litter boxes, and whether the cat favored one side over the other when lying down to sleep. In addition to this "spontaneous" data, researchers supervised each cat retrieving treats from a food maze — a spherical tower with three layers of holes leading to a snack — during several lab trials.

"The findings point more and more strongly to underlying differences in the neural architecture of male and female animals," Wells said in a statement. And while the explanation for this gender-biased behavior could be as simple as the presence of different hormones in male and female cats, Wells said a cat's preferred paw might be a strong indicator of the animal's personality.

"Ambilateral animals with no preference for one side or the other, and those that are more inclined to left-limb dominance, for example, seem more flighty and susceptible to poor welfare than those who lean more heavily towards right-limb use," Wells said. "We have just discovered that left-limbed dogs, for example, are more pessimistic in their outlook than right-limbed dogs. From a pet owner's perspective, it might be useful to know if an animal is left- or right-limb dominant, as it may help them gauge how vulnerable that individual is to stressful situations."

The new study did not account for the participating cats' stress levels or emotional welfare, but all of them were judged to be healthy.