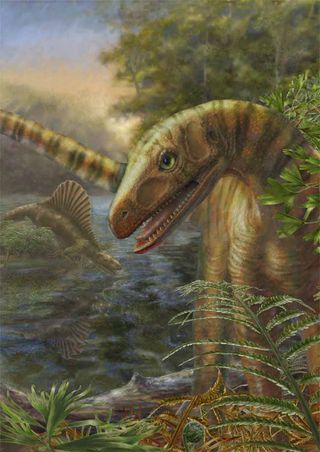 A close dinosaur relative, Asilisaurus kongwe, lived some 240 million years ago in what is now southern Tanzania. The peg-like teeth and upturned beak on its lower jaw suggest the animal was a plant eater.
(Image: © Marlene Hill Donnelly, Field Museum.)

A four-legged animal about the size of a large dog with a long tail is now the oldest known relative of dinosaurs, dating back some 240 million years. Paleontologists recently examined the bones from at least 14 individuals of this proto-dinosaur that were discovered in southern Tanzania.

The dino-like animal was small, weighing about that of a young child, and likely munched on plants.

Until now, the fossil record suggested the oldest known dinosaurs went back just 230 million years. But the new finding, tells scientists dinosaurs were around much earlier and their lineage had already split off from a group of dinosaur-like relatives by about 240 million years ago.

From the various bones of the species now called Asilisaurus kongwe, Sterling Nesbitt, a postdoctoral researcher at the University of Texas at Austin, and his colleagues pieced together a nearly complete skeleton of the animal.

The researchers think the dinosaur relative was about 3 to 10 feet long (1 to 2 meters) from nose to tail and about 3 feet (1 meter) tall from head to toes, Nesbitt said. The animal weighed in the neighborhood of 22 to 66 pounds (10 to 30 kg).

"The combination of the beak on the lower jaw and these teeth suggests it was probably eating plants," Nesbitt told LiveScience.

The analysis provides a window into dinosaur evolution, particularly how the animals acquired plant-eating abilities.

Asilisaurus was a member of a group of dinosaur-like animals called silesaurs, which were dinosaurs' closest relatives. The relationship between silesaurs and dinosaurs would be analogous to that between chimps and humans.

In fact, silesaurs continued to live side-by-side with early dinosaurs throughout much of the Triassic Period, which lasted from about 250 million to 200 million years ago.

By looking at features of Asilisaurus as well as two major dinosaur lineages (ornithischians and sauropodomorphs), Nesbitt's team thinks they evolved their plant-eating adaptations independently. That independent evolution would explain why the groups all have slightly different features aimed at the same goal – snagging leafy foods.

The researchers suggest the ability to shift diets may have led to the evolutionary success of these groups.

The research, which will be detailed in the March 4 issue of the journal Nature, was funded by the National Geographic Society, Evolving Earth Foundation, Grainger Foundation, and the National Science Foundation.