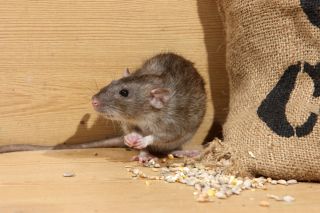 Rats get a bad rap for spreading the plague, or Black Death, that killed millions of people in medieval Europe.

But it turns out that rats might not be to blame after all — instead, the disease may have spread from person to person through human-feeding parasites, including fleas and lice, a new study suggests.

The findings challenge "the assumption that plague in Europe was predominantly spread by rats," the researchers wrote in their study, published online today (Jan. 16) in the journal Proceedings of the National Academy of Sciences.

Plague is caused by a bacterium called Yersinia pestis, which is carried by rodents and their fleas. The disease is perhaps best known for killing an estimated one-third of the population in Europe in the 1300s, during a pandemic called the Black Death. However, researchers are unsure of exactly how the disease was transmitted during this pandemic. [Pictures of a Killer: A Plague Gallery]

In modern times, the disease is most commonly spread to humans when fleas that have fed on infected rats go on to bite humans. This also could have happened during the Black Death — for instance, when infected rats died, their flea parasites could have "jumped" from the recently dead rat hosts to humans, according to the Centers for Disease Control and Prevention.

But some researchers argue that this mode of transmission doesn't fit with the historical evidence. For instance, records from the time do not mention large numbers of rats dying off, as was seen in later outbreaks in Europe starting in the 19th century, according to the new study. And the Black Death spread much farther and faster, and killed many more people, than modern outbreaks do, the study authors said. This has led some researchers to speculate that human parasites played an important role in spreading the Black Death. For example, fleas and lice could have fed on infected humans, and then transmitted the disease to other humans.

In the new study, the researchers used mathematical equations to create three different models of plague transmission during a series of outbreaks in Europe called the second pandemic, which includes the Black Death and occurred during the 14th through 19th centuries.

Using publicly available data on plague deaths in nine regions during the second pandemic, the researchers found that the human parasite model best reflected death rates in seven of the nine regions, compared with the other two models.

"Overall, our results suggest that plague transmission in European epidemics occurred predominantly through human [parasites], rather than commensal rat or pneumonic transmission," the researchers wrote in their paper.

The researchers noted that their models could be improved with more data. For example, the models in the current study did not account for local conditions that could have affected disease transmission, such as war, famine, immunity and public health interventions, they said.

"Plague is undeniably a disease of significant scientific, historic and public interest, and is still present in many parts of the world today," the researchers said. "It is therefore crucial that we understand the full spectrum of capabilities that this versatile, pandemic disease has exhibited in the past," they concluded.