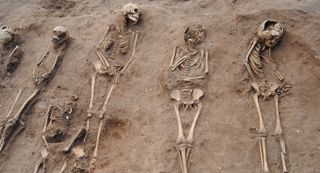 The burial site suggests that the local community was overwhelmed by the number of people who died.
(Image: © University of Sheffield)

A 14th-century mass burial pit full of victims of the Black Death has been discovered at the site of a medieval monastery hospital, according to archaeologists.

Researchers uncovered 48 skeletons — 27 of which were children — at an "extremely rare" Black Death burial site in Lincolnshire, in the United Kingdom, they said. DNA testing of teeth that were uncovered at the site revealed the existence of plague bacteria, the scientists said.

The presence of such a large burial site suggests that the community was overwhelmed by the number of victims of the Black Death, said lead archaeologist Hugh Willmott, a senior lecturer in European historical archaeology at the University of Sheffield. A mass grave would have been the easiest way to cope with the number of people who died during the outbreak. [In Photos: Tracking the Devastating Impact of the Black Death]

"Despite the fact it is now estimated that up to half the population of England perished during the Black Death, multiple graves associated with the event are extremely rare in this country," Willmott said in a statement.

The bubonic plague (commonly called the Black Death) was one of the worst pandemics in human history, killing an estimated 75 million to 200 million people in Europe and Asia during the 1300s, according to the U.S. Centers for Disease Control and Prevention.

Previously identified 14th-century sites with skeletons that showed evidence of the presence of plague were historically documented cemeteries in London. In these instances, Willmott said that local authorities would have been forced to create emergency burial grounds for the large numbers of urban dead.

The Lincolnshire site, located in a rural and previously unknown area, sheds light on how difficult it was for small communities to cope with such a devastating threat, Willmott said.

"While skeletons are interesting, they just represent the end of somebody's life, and actually what we are interested in as archaeologists is the life they led before they died," Willmott said. "One of the ways we can connect with that is through the everyday objects they left behind."

A Tau Cross pendant was among the artifacts that the dig uncovered. It was likely used as a cure against a condition that was called St. Anthony’s fire, which was likely one of any number of skin conditions, according to such medical organizations as the American Phytopathological Society. The cross was found in an excavated hospital building that belongs to the Thornton Abbey monastery, the researchers said.

Prior to the recent discovery, the Abbey site was "just an ordinary green field grazed by sheep for hundreds of years," Willmott said. "Like many fields across England, as soon as you take away the turf, layers of history can be revealed by archaeology."