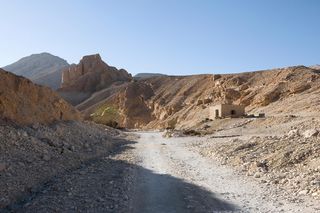 Excavations have begun in an area of the Valley of the Kings where the tomb of Tutankhamun's wife may be located, archaeologist Zahi Hawass announced today (Jan. 16).

During previous excavations, the researchers identified something intriguing in this area near Ay's tomb — four foundation deposits and radar images of what seemed to be the entranceway of a tomb that may exist about 16 feet (5 meters) below the surface.[See Photos of Egypt's Valley of the Kings]

Hawass, who is leading the excavations, told Live Science in July 2017 that he believes a tomb is there. "We are sure there is a tomb there, but we do not know for sure to whom it belongs," he told Live Science in an email at the time. He later cautioned that until excavations were conducted, archaeologists couldn't be certain of the tomb's existence. "It is all possibilities until we excavate," he wrote that month in a follow-up email.

If the tomb exists, it could belong to Ankhesenamun, Hawass said. She was the wife of Tutankhamun but married Ay not long after Tut's death. Due to the location of the evidence, Hawass and his team think that any undiscovered tomb may belong to her.

After Ankhesenamun's marriage to Ay, mentions of her don't appear again in surviving historical records. It's not known when Ankhesenamun died, how she died or where she was buried. Egyptian pharaohs sometimes had multiple wives and Ay's tomb only mentions another wife who was a woman named Tey.