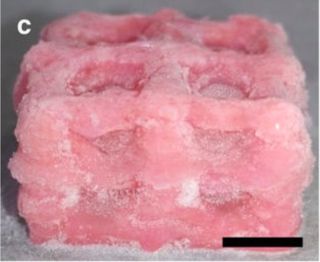 A new 3D-printing technique can create tissues as soft as a human's squishy brain or spongy lungs — something that has not been possible before.

"Additive manufacturing," or 3D printing, promises to allow doctors to produce tailored organs for patients using the patients' own cells, which could help bring down the severe shortage of organs available for people who need transplants.

However, the technology still has significant limitations. To create these organs, bioengineers need to 3D print scaffolds that mimic the structure of the organs, which are then populated with the cells. So far, only relatively stiff materials can be 3D-printed. But some organs in the body, such as the brain and the lungs, have an extremely soft structure. [The Strangest Things That Were 3D-Printed in 2017]

"The types of biological structures that have been printed before would be things like bones or stiffer organs, such as the liver and kidney," said Zhengchu Tan, a researcher in the Department of Mechanical Engineering at Imperial College London and the lead author of a recently published paper describing the new 3D-printing technique.

"We have used a very soft material, which is a composite hydrogel, and printed the softer tissues similar to the brain and possibly lung as well," Tan told Live Science.

But the problem with 3D printing very soft materials is that the underlying layers tend to collapse as additional layers are added on top of them during the 3D-printing process, Tan said. Indeed, the process of 3D printing involves creating an object layer by layer, which means that the lower layers need to be able to support the weight of the growing structure.

To get around this problem, the researchers cooled things down — literally. "We are using a cryogenic printing process, which means that the previous layer is frozen," Tan said. “Freezing makes the layer very solid and stable so that the next layer can be printed on top of that and the 3D object doesn't collapse under its own weight."

After the printing is complete, the engineers can slowly thaw the object, and it keeps its shape, she said.

To 3D print the scaffold, the researchers used a novel composite hydrogel that consists of two components: a water-soluble synthetic polymer polyvinyl alcohol, and a jelly-like substance called Phytagel.

Then, they coated the resulting structure with collagen and populated it with human cells. For the purposes of the experiment, however, the researchers used skin cells instead of brain cells on scaffold designed to mimic the human brain.

So far, the researchers have been able to create only small samples of the brain-like tissue, and not the entire brain. [11 Body Parts Grown in the Lab]

"If you try to 3D print a full brain with a standard commercially available 3D printer, it's going to be very challenging," said senior study author Antonio Elia Forte, a research associate in the Department of Bioengineering, also at Imperial College London.

"When you get into complex structures, the softer you go with material properties, the greater risk that the geometry will collapse on itself," Forte told Live Science.

The current cryogenic technique the researchers use cools the material through the 3D-printing plate, Forte said. That means that layers further removed from the plate would thaw before the entire object was printed, and the whole cryogenic effect would be lost.

In the future, the researchers could further evolve the technique by using a chamber that would keep the whole object cold, Forte said.

Still, the new technique is a step forward. "Now we are finally able to print very soft materials, and this wasn't achieved before," Forte said. Moving forward, the researchers aim to improve the technique to be able to print larger objects.

Forte added that bioengineers are probably still decades away from creating fully functioning complex human organs such as brains or lungs using 3D printing. Nonetheless, the current technique could be used to help researchers study how brain or lung tissue behaves under various conditions — for example, in impact situations, such as traumatic brain injuries.

The paper was published in November 2017 in the journal Scientific Reports.