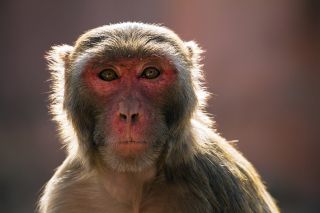 Monkeys infected with the herpes B virus may be symptom-free, but in people the virus can be fatal.
(Image: © Shutterstock)

Visitors to Florida's Silver Springs State Park should avoid monkeying around with the reserve's feral macaques; officials warn that the primates carry a strain of the herpes virus that can be fatal to humans.

About 175 free-roaming rhesus macaques (Macaca mulatta) inhabit the park, descended from a population of around a dozen animals that were released in the 1930s to promote local tourism. Hundreds more of the macaques can be found wandering the areas adjacent to the park.

Now, researchers from the Centers for Disease Control and Prevention (CDC) report that about 25 percent of the monkeys carry macacine herpesvirus 1 (McHV-1), which causes only mild symptoms, if any, in monkeys but can be deadly in people. [10 Deadly Diseases That Hopped Across Species]

The scientists also discovered that as many as 14 percent of the monkeys shed DNA from the virus in their saliva, presenting a risk of virus transmission to humans, the researchers reported in a new study, which was published online in the February 2018 issue of the journal Emerging Infectious Diseases.

Herpes viruses have infected animals in the primate family for millions of years. In fact, one strain of herpes — HSV-2 — appeared in early humans only after it was transmitted from chimpanzees about 1.6 million years ago, Live Science previously reported.

McHV-1, which is also known as herpes B or monkey B virus, is carried by several species of macaque monkeys, which are thought to be a "natural host" for the virus, according to the CDC.

Previous studies of the Silver Springs Park rhesus populations had identified herpes B in the animals, according to a study published in May 2016 by the University of Florida's Institute of Food and Agricultural Sciences (IFAS).

In the new study, scientists analyzed samples of blood, feces and saliva collected from the macaques, as well as soil samples from the monkeys' habitat. Blood samples from 317 macaques revealed that 84 monkeys carried the virus and that the odds of a monkey being infected increased with age.

To date, only 50 cases of herpes B have been documented in humans in the U.S. since the disease was first identified in 1932, and many of the infections resulted from animal scratches or bites, according to the CDC.

But in humans, infection with herpes B can lead to severe brain damage or death, with 70 percent of untreated patients killed by complications from infection. Of the 50 reported herpes B cases, 21 proved fatal, the CDC reported. The virus could pose a serious threat to public health and safety, the CDC said.

Visitors to Silver Springs Park risk exposure to herpes B by coming into contact with monkey urine or feces, or through the animals' saliva in scratches or bites, the researchers reported in the new study. They concluded that management plans are required to limit the macaques' transmission of this potentially fatal pathogen.

However, the Animal Rights Foundation of Florida (ARFF), a non-profit organization, disagrees with the researchers' conclusion that the monkeys pose a threat. Dr. Nedim Buyukmihci, an emeritus professor of veterinary medicine at the University of California-Davis, said in a statement that was emailed to Live Science by the organization that the animals do not currently pose a serious threat to human health and safety, and that calls for their removal from the park in response to the study's findings were "misguided and irresponsible."

Hunting the monkeys might even make the problem worse, as increasing the stress levels in macaques with latent infections could lead them to become contagious, Buyukmihci warned.

The best course for protecting park visitors from infection is for park officials to improve public awareness about keeping a safe distance from wildlife, "and to strictly enforce rules against feeding or harassing monkeys," ARFF campaigns coordinator Nick Atwood said in the email.

Editor's note: This article was updated Jan. 19 to include a statement from the ARFF.