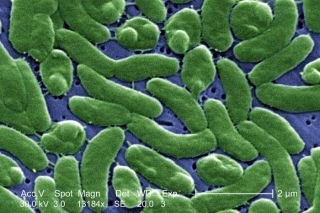 A Texas woman developed a fatal infection with flesh-eating bacteria after eating raw oysters, according to news reports.

The woman, Jeanette LeBlanc, went crabbing with her friends and family on the coast of Louisiana in September, according to CBS News. During the trip, LeBlanc and her friend Karen Bowers shucked and ate about two dozen raw oysters, Bowers told CBS.

But shortly afterward, LeBlanc experienced breathing problems and had a rash on her legs, which looked like an allergic reaction, Bowers said.

But LeBlanc's condition continued to worsen, and doctors said she was infected with a type of "flesh-eating" bacteria called Vibrio.

The Vibrio bacteria naturally live in coastal waters and are particularly abundant between May and October, when the water is warmer, according to the Centers for Disease Control and Prevention (CDC).

People can become infected with Vibrio by eating raw or undercooked shellfish, which include oysters, the CDC said. People can also become infected if they have open wounds on their skin that are exposed to brackish or salt water.

Vibrio bacteria cause about 80,000 illnesses and 100 deaths each year in the United States, according to the CDC. Most people who contract Vibrio from raw oysters experience only diarrhea and vomiting, and those with these milder cases typically recover in about three days, according to the CDC. But in some people, more serious illness can occur, resulting in bloodstream infections and severe blistering skin lesions, the CDC says. About 1 in 4 people with these serious infections dies from the illness.

"If we had known that the risk was so high, I think she would've stopped eating oysters," Bergquist said.