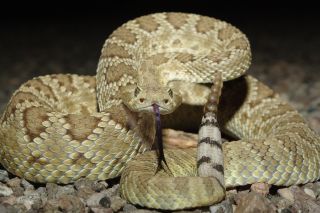 Rattlesnake pills sold as a folk remedy may carry Salmonella bacteria, which are commonly found in reptiles.
(Image: © Shutterstock)

Rattlesnake pills — capsules containing dried and powdered rattlesnake flesh — have been linked to a recent Salmonella infection, according to a new report.

The pills, which are widely marketed in Mexico as a remedy for a range of ailments, including HIV and cancer, sickened a person in Kansas who had taken the capsules the week before becoming ill, the Centers for Disease Control and Prevention (CDC) reported yesterday (Dec. 19) in a statement.

Salmonella, which causes the illness salmonellosis, infects people when they eat food contaminated with the bacteria, which can originate in foods of animal origin or can migrate to food during handling.

Salmonellosis causes abdominal pain, fever and diarrhea, which in some cases can be severe enough to require hospitalization, according to the CDC. In the U.S., an estimated 1 million people each year develop foodborne illnesses caused by Salmonella. These infections lead to approximately 19,000 hospital visits and cause about 380 deaths each year, the CDC reported.

People with compromised immune systems, the elderly, children under the age of 5 and pregnant women are especially vulnerable to severe Salmonella infection, according to the CDC.

Reptiles are known to carry Salmonella as part of their normal digestive system, and even when reptiles appear clean and healthy they can infect people and cause illness, Colin Basler, an epidemiologist with the CDC's Division of Foodborne, Waterborne, and Environmental Diseases, told Live Science in an email.  Contact with reptiles hosting the bacteria has been linked to Salmonella outbreaks in people; in 2012, for example, 66 people across 16 states — more than half of whom were children under the age of 10 — were sickened by Salmonella that they contracted from turtles.

Under the right conditions, Salmonella can survive in soil for up to one month, Basler said. And dried reptile flesh, such as the powdered rattlesnake meat found in pills, can still carry the bacteria. In 2007, researchers obtained the first DNA match between Salmonella in a hospitalized patient and bacteria in preserved rattlesnake flesh, The Washington Post reported in April of that year.

"Anecdotal evidence linking capsules of dried rattlesnake meat to Salmonella poisoning has been reported for years," John James, then a microbial epidemiologist at Children's Hospital in Denver, said in a 2007 presentation at the Society for Healthcare Epidemiology of America conference, according to the Post.

"For the first time, however, we've used DNA molecular testing to prove definitively that the Salmonella bacteria found in the dried meat was the cause of a life-threatening case of Salmonella blood poisoning in a patient treated at our hospital," James said.

Thoroughly cooking foods of animal origin — such as beef, eggs or poultry — and avoiding food or drinks containing raw eggs or unpasteurized milk can help to prevent Salmonella exposure, according to the CDC. Hands and food-preparation surfaces should be thoroughly washed after they've touched raw animal products, and children and those with weakened immune systems should not handle reptiles of any kind, the CDC further suggested.

As for rattlesnake pills, people who are considering taking this purported remedy should speak to a health care provider, "especially if you are in a group more likely to get a severe Salmonella infection," CDC representatives said in the statement.