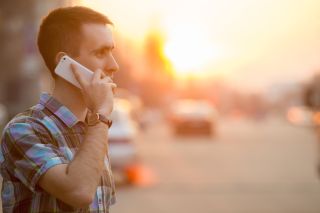 There's no harm in following California's new cellphone guidelines detailing how to reduce exposure to a phone's radio-frequency (RF) energy, but know this: There's no science showing that following these guidelines will make you safer, experts said.

That's because large, high-quality studies have failed to find any big, adverse health effects linked to cellphone use, said John Moulder, a professor emeritus of radiation oncology at the Medical College of Wisconsin.

"The guidelines are designed to reduce exposure [to RF energy]. The guidelines say nothing about whether there's any [cancer] risk," Moulder told Live Science. "Will they make you safer? I don't think so. But if you're worried about it, do it." [10 Things You Didn't Know About the Brain]

The guidelines, released by the California Department of Public Health (CDPH) on Friday (Dec. 13), advise the following:

The guidelines were released following a lawsuit brought against the state by Joel Moskowitz, the director of the Center for Family and Community Health at the University of California, Berkeley's School of Public Health, who wanted the CDPH's records on the guidelines to be made public. "The guidelines themselves are quite good," Moskowitz told Live Science. "They cover a number of important points that people should definitely pay attention to and follow to reduce their exposures."

California's guidelines aren't the only ones out there. The Centers for Disease Control and Prevention published a guide in 2014, writing that "at this time, we do not have the science to link health problems to cellphone use." In 2015, Connecticut released guidelines that came to the same conclusion.

California's guidance isn't a warning or an alert, Dr. Karen Smith, director of the CDPH, told HuffPost. "This is a response to concerns that have been expressed to us, over and over again, by the general public," Smith said. "Our response is, if you have a concern, here are some very practical things you can do."

For many, the guidance is timely, given that about 95 percent of people in the U.S. own a cellphone, and 12 percent rely on smartphones for everyday internet access, the CDPH reported. On average, children get their first smartphone at age 10, and most young people keep their phones near them at all hours, the CDPH said.

When a phone receives data, such as by downloading a podcast or a text message, the only RF energy a person receives is from the cellphone tower, which is likely hundreds of feet or more away, Moulder said. "Everybody around you is getting that exact same signal that you're getting," but that signal is directed at your phone, not theirs, he said. [9 Odd Ways Your Tech Devices May Injure You]

However, when a person is talking on the phone, the RF radiation travels out through the phone's antenna in all directions, including through a person's body, the CDPH said. It's this radiation that is concerning to some people, even though science has yet to find consistent evidence linking cellphone use with big health problems, Moulder said.

When a phone is on but not in use, it periodically sends signals to the tower so the tower can locate the device in case there's a call, but these signals are "marginal compared to when you're broadcasting," Moulder noted.

"With some minor exceptions, if you're worried about it, this is a good set of guidelines for reducing your [RF] exposure," Moulder said. He did take exception to some of the recommendations, such as the one suggesting that people shouldn't sleep near their phones unless the devices are off or in airplane mode. As long as the phone isn't actively transmitting data, the exposure to RF radiation is small, he said.

The same goes for downloading files. It's not the downloading that increases exposure, but the emitting of data, Moulder said.

However, RF exposure can increase if a person's phone has a weak signal or if a person is traveling in a fast-moving vehicle, he said. In these cases, the phone puts out more RF radiation so it can maintain its connection with the cellphone tower, he said.

Over the years, many studies in rodents and humans have looked at whether RF radiation has negative health effects. Some studies have found elevated risks linked to RF exposure, such as a study published in 2007 in the American Journal of Epidemiology, which found that people who engaged in heavy cellphone use and those who used cellphones in rural areas had higher odds of developing salivary gland tumors than people who didn't use cellphones at all.

Another small study showed that the part of the brain closer to a cellphone that's emitting RF radiation used more glucose than the tissues on the other side of the brain, although it wasn't clear whether this effect was harmful, Live Science previously reported. Moreover, Moskowitz pointed to studies that show an increase of certain types of brain tumors in the heaviest cellphone users, including a 2014 study in the journal Occupational and Environmental Medicine.

However, while an association of RF radiation and brain cancer is possible, the overall evidence for a causal connection is weak, Moulder said.

"Quite honestly, there are a number of individual studies that show slightly elevated risk for users," he said. "And lots of other studies that don't show it." For instance, another glucose study showed the opposite effects — that the glucose levels in the brain went down by the cellphone site, Moulder said.

"When you look at all the studies, you don't find any pattern," he said. [10 Do's and Don'ts to Reduce Your Risk of Cancer]

But that doesn't mean cellphones have no health risks. "What it says is if there is a risk, it's very small or only occurs under very special circumstances," Moulder said. "It sounds trite, but there is no way to prove the absolute absence of risk."

Still, he noted that there is no reported long-term increase in the frequency of brain tumors in the general population, which means there likely isn't a short-term risk either, given that many people began using cellphones in the mid to late 1990s and early 2000s. A 2010 study in the journal Neuro-Oncology showed that between 1992 and 2006, there wasn't a connection between the number of brain cancer diagnoses and cellphone use.

Many studies, however, are done in adults. As there are fewer well-done studies on children and cellphone use, and given that children's brains are still developing, a parent might want to be cautious when giving a cellphone to a youngster, Moulder said.

"My advice as a scientist would be that there is no evidence of a risk to children," he said. "My advice as a step-grandparent is be cautious. It has nothing to do with science."