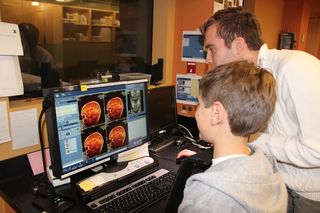 Researchers used a type of magnetic resonance imaging (MRI) to look at the tissue density of the brains of kids and adults.
(Image: © Jesse Gomez and Kalanit Grill-Spector at the Vision and Perception Neuroscience Lab)

The part of the brain that specializes in recognizing faces becomes denser with tissue over time, new research finds.

The discovery is surprising to researchers, because brain development from childhood into adulthood was long thought to happen mostly through the pruning of synapses, the connections between neurons. In other words, the brain was thought to develop by becoming more streamlined, not by growing new tissue.

The study also showed that these changes in brain structure correlated with the ability to recognize faces. In general, adults are better at recognizing faces than children are, said study leader Jesse Gomez, a doctoral candidate in neuroscience at Stanford University.

But development is personalized. "There are some kids that have adult-like tissue values, but those kids also have adult-like brain function," Gomez told Live Science. Likewise, some adults who were bad at recognizing faces showed child-like density in their face-recognition region, he said. [Inside the Brain: A Photo Journey Through Time]

The textbook explanation of brain development is that infants are born with a riot of neurons and connections that get snipped away over time, Gomez said. Useful connections strengthen, while those that are underutilized get pruned. As a result, the brain becomes more efficient.

This process certainly takes place over the first three years of life, Gomez said, but little is known about development after age 3. He and his colleagues are tackling the question by scanning the brains of elementary-school children again and again over time, and comparing those children's brains to the brains of young adults.

While comparing the child brains with the adult brains, the researchers found increasing density with age in the posterior part of a brain region called the fusiform face area, located in the visual cortex, near the back of the brain. This brain region specializes in differentiating human faces.

To detect these changes in density, researchers used a method called qualitative magnetic resonance imaging (qMRI). Standard MRI can differentiate between different brain tissues, like white matter and gray matter, Gomez said, but it can't give any sort of absolute values of brain-cell density that can be compared between people. The new method, qMRI, can. It works by exciting protons in the water in brain tissue. The time it takes for those protons to calm back down to their resting state provides some information about brain density, Gomez explained.

He compared the excited protons to spinning tops.

"You can think, if a top is on a cluttered table, it's going to slow down more quickly and bump into things and fall down more quickly," Gomez said. In the same way, if a proton is in an area dense with tissue, it will settle down more quickly. Thus, a quicker time to relaxation means a denser brain region.

The researchers found faster relaxation times in the 25 adults (ages 22 to 28) in the study than in the 22 children (ages 5 to 12). This indicator of increased density was found only in the face-recognition region, not in a nearby region that's specialized for recognizing places. What's more, the denser a person's face-recognition area, the better he or she performed on tests of facial recognition taken in the MRI scanner. [10 Things You Didn't Know About the Brain]

To figure out what sort of brain tissue was causing the increased density with age, Gomez and his colleagues first ran computer simulations testing various possibilities. Scientists already knew that over time, the brain gains myelin, the fatty substance that insulates the long axons of neurons, like plastic around an electric wire. But the simulations showed that myelin alone couldn't explain the brain density, the researchers report in the Jan. 6 issue of the journal Science.

Then, the researchers turned to anatomical samples of donated brains from deceased adults. These samples showed that the face-recognition region of adult brains didn't have any more cell bodies than the place-recognition area in adulthood. In fact, it had fewer.

"That tells us the tissue that is growing can't be the cell bodies, so it must be the 'neural fill,'" Gomez said. Neural fill refers to the tissues surrounding the cell bodies, like axons, synapses and dendrites, the branched structures at the ends of axons that end in synapses.

"If you can imagine a little garden, the garden itself isn't getting wider or growing in square footage, but the plants that are there are sprouting a few more branches or the leaves are getting fuller," Gomez said.

Dendrites, in particular, might explain why people get better at facial recognition from childhood to adulthood, Gomez said. These branching structures might expand to gather more information from disparate sources in the brain, he said. They also might help neurons reach out to neighboring neurons to quiet them, essentially amplifying their own voices when they receive a stimulus for which they're especially attuned.

No one knows what might happen to the face-recognition region's density in older adulthood, Gomez said. Facial-recognition abilities peak in people's late 20s or early 30s — slightly older than most of the adults in the study, he said. The researchers plan to follow up with the same group of participants over time.

If the face-recognition region is "still growing at that time, that would be superinteresting," Gomez said, "but we'll have to find out when we scan them again."